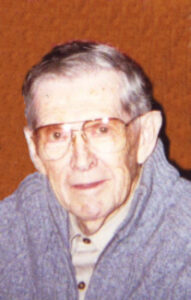 Robert L. Cultice Sr. went home to be with his Lord and Savior on Saturday, February 22, 2014 at Miller’s Merry Manor in Culver, IN.
Robert was born on June 16, 1929 in Culver, IN, to Emmitt E. and Marie K. Smeltzer Cultice, who preceded him in death. He graduated from Culver High School in 1947 and attended Manchester College.
Robert married Frieda R. Strefling in Knox, IN, on November 14, 1953 and in the following years they were blessed with four children: Debra L. Miller of Culver, IN; Robert L. Cultice Jr. (Denise) of North Judson, IN; Katherine A. Cultice of Pompano Beach, FL; and Dennis E. Cultice (Kris) of Warsaw, IN.
He is survived by six beloved grandchildren – Robert L. Cultice III (Rachel), Megan Evon, Elizabeth Miller, Kathleen Miller, Evan Cultice, and Ryan Cultice; six precious great-grandchildren – Ava, Charlotte, Nolan, and Olivia Cultice, Bryce Meeks, and Emma Evon; and Tiger (the dog). Several cousins include Jean Snyder, Joanne Lucas, Tom Cultice, Richard Cultice, Saundra Kennedy, Terry Miller, and Jerry Miller. Robert was drafted in 1951 and trained with the 101st Airborne Division at Camp Breckenridge in Owensboro, KY, before being shipped out to Japan. From there, he went to Busan, Korea. While awaiting his assignment with the 8th Army, he was recommended to apply for a driver’s job at the Army Headquarters.
After a thorough FBI check, Robert was cleared to drive for anyone, including the President of the United States, if needed. Turns out, he did. Robert was the driver for President-elect Dwight D. Eisenhower in December 1952, and also Lt. Gen. B. Ridgeway, Lt. Con. James A. Van Fleet, and Syngman Rhee, President of South Korea. Robert was proud to serve his country and felt privileged to be a driver for President-elect Eisenhower. Robert received his honorable discharge in January 1953 and was part of Sen. Richard Lugar’s Veterans History Project.
Robert was a local insurance agent for over 50 years and owner of Insurance Services by Cultice; 28 of those years he was at the State Exchange Bank in Culver. He was a member of the Indiana Association of Life Insurance Agents, the South Bend Underwriters Association, and was on the Real Estate Planning Council of South Bend. Robert was a life insurance agent for Lincoln National Life Insurance Company, and in 1975 he achieved national distinction when he was ranked in the top one percent in the nation. Robert served his community well. He was president and treasurer of the Lion’s Club, the Culver-Union Township United Fund, and the Culver Chamber of Commerce. He served as an officer of the Trinity Lutheran Church congregation, was a member of the Veterans of Foreign Wars and the American Legion, and was a lifetime member of the Culver VFW Post 6919. He was also the secretary-treasurer of the Maxinkuckee Country Club and was on the board of directors of the American Lung Association for Northern Indiana.
Robert and his wife are Charter Members of Trinity Lutheran Church in Culver.
Visitation will be from 4 – 8 p.m. EDT on Tuesday, February 25, 2014 in the JOHNSON-DANIELSON FUNERAL HOME, 1100 N. Michigan Street, Plymouth.
Funeral services will be held on Wednesday, February 26, 2014 at 11:00 a.m. EDT at TRINITY LUTHERAN CHURCH, 330 Academy Rd, Culver, where visitation will resume at 10 a.m. The Rev. K. C. Dehning, pastor will officiate. Military Honors provided by the CULVER V.F.W. POST 6919 will follow at the church.
Burial will be in the CULVER MASONIC CEMETERY. The family would also like to express their deep-felt gratitude to the staff at Miller’s Merry Manor, Dr. Warren K. Reiss, Dr. Michael F. Deery, and Dr. Szabolcs Szabo.
In lieu of flowers, memorial contributions may be made to Trinity Lutheran Church, 330 Academy Rd, P.O. Box 365, Culver, IN 46511 or in Robert’s name to Manchester University, 604 E. College Ave. P.O. Box 365, N. Manchester, IN 46962-0365.