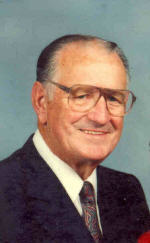 A lifelong educator and farmer, Robert L. “Bob” Huffman, 86, of Lawrence Lake, Plymouth, and Englewood, Florida, died, following a short illness, at 3:07 p.m. on Thursday, December 5, 2002. Bob died in the Marion General Hospital, Marion, Ind. A Marshall County resident all of his life, Bob was born in Tyner, Ind., on July 20, 1916, the son of Clarence and Grace Thomas Huffman. He graduated from Tyner High School in 1934 and also from Indiana Wesleyan and Ball State Universities. He taught or served as a principal of schools for 41 years in Teegarden and LaPorte where he was principal of Washington and Park Elementary schools. He also served for 27 years as a trustee of Indiana Wesleyan University and spent a term as president of the Northern Indiana Principal’s Association. On June 22, 1940, in Nappanee, Ind., Bob and June Dumph were married. In addition to his career as an educator, he spent 49 years in Tyner as a produce farmer, specializing in melons, sweet corn and strawberries. A life-long member of the Plymouth Wesleyan Church, Bob held a variety of offices and was a delegate to state and denominational conferences for more than 40 years. In Englewood, Fla., where he spent his winters for the last 20 years, he was active in the Good Shepherd Church. His interests in life were many. A devoted family man, he loved them all dearly and was especially fond of his great-grandchildren. An avid fisherman and traveler, he had traveled around the world. He followed all kinds of sports and was a dedicated Chicago Cub fan. He liked to read, particularly his Bible. He enjoyed working cross word puzzles, was a good cook and loved to garden, especially the raising of roses. Bob is survived by June, his wife of 62 years and by their four children: James Huffman, Springfield, Ohio; Joanna (Mark) Burns, Mishawaka, Ind.; John (Barbara) Huffman, Plymouth and Judy Huffman, Marion, Ind. Eight grandchildren, four step-grandchildren, five great-grandchildren and two step-great-grandchildren and many nieces and nephews survive him as well. Bob was preceded in death by his parents, four brothers, a sister, a granddaughter and a daughter-in-law. Friends may visit with the family from 2 to 4 and 6 to 8 p.m. on Sunday, December 8, 2002, at the Johnson-Danielson Funeral Home, 1100 N. Michigan St., Plymouth, Ind., and one hour prior to the services at the church on Monday. Funeral services for Bob will be held at 11 a.m. on Monday, December 9, 2002, in the Plymouth Wesleyan Church, 11203 S. Michigan St., Plymouth. The Revs. Les Kephart, pastor of the Plymouth Wesleyan Church and Robert Vardaman, a retired pastor of the church, will officiate at the services. Interment will be in New Oakhill Cemetery, Plymouth. Memorial gifts may be made in Bob’s memory to the Plymouth Wesleyan Church or to Indiana Wesleyan University.