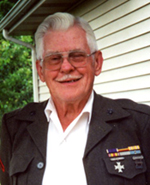 Robert L. Mueller, 93, passed into the arms of Jesus at 4:55 p.m. on Independence Day of 2018 at Elkhart Hospice.
Robert was born in Chicago, Illinois on September 16, 1924 to the late Lawrence and Edna (Reed) Mueller. He would work in the oil fields in southern Illinois before moving onto a farm near Plymouth in 1942.
On March 27, 1948 in LaPaz, Robert took as his wife the late Doris I. Shidler. She preceded him in death on March 17, 2018. Robert served for our country in the U.S. Marines during WWII as a rifle instructor and combat soldier in the Korean Conflict until his Honorable Discharge in 1951. He was wounded in action while serving with a rifle platoon and received a Purple Heart. He obtained the rank of Private First Class as he served in the 1st Marine Division, 1st Battalion, B Company, 1st Platoon and 2nd Squad. He was a member of the 1st Marine Division Association in Indianapolis.
He worked for Studebaker for 22 years as an assembly worker and welder. He would also work for Oliver/White Farm Equipment for 21 years as an assembly worker and set-ups. Robert lastly worked for Price Nursery as a landscaper for 21 years until retiring.
Robert and his family became members of the Calvary Baptist Church in LaPaz in 1962. He served the church in several capacities including: Deacon, Trustee, Sunday School Teacher, and Jr. High Youth Group Leader. He was a proud member of the NRA, he coached Little League baseball, and was an avid hunter and fisherman. He was also a member at large of the VFW and the DAV.
He is survived by two sons, Larry (Kristine) Mueller of Granger and Bob (Rebecca) Mueller of LaPaz; four grandchildren: Nathan (Katie), Jonathan (April), Eric and Ann (Mike Vidmar); and seven great-grandchildren: Isabella, Sofia, Lucas, Jacob, Benjamin, Kali and Gavin; and a brother, Daniel (Frances) Mueller of Gainesville, FL and loving nieces and nephews. Robert shared his birthday with his oldest (Nathan) and youngest (Ann) grandchildren.
Robert was preceded in death by his wife, parents and brother, William Mueller.
Visitation will be held on Wednesday July 11, 2018 from 1-3 p.m. in the Johnson-Danielson Funeral Home, 1100 N. Michigan Street, Plymouth. Funeral services will follow at 3 p.m. with Pastor Nathan Rettinger officiating.
Burial will be in the New Oak Hill Cemetery, Plymouth with Military Honors provided by members of the American Legion Post 27, Veterans of Foreign War- Marshall County Post 1162 and Disabled American Veteran Chapter 42.
Memorial contributions can be made to Calvary Baptist Church, 330 Cortland Street, LaPaz, IN 46537 and Center for Hospice Care- Elkhart, 22579 Old US 20 E Elkhart, IN 46516.