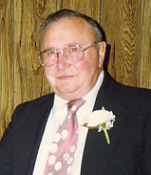 Robert L. Murray, 82, was born September 10, 1922 in South Bend, Indiana, the son of George D. and Maude E. Mendenhall Murray. Bob died of complications from a Diabetic condition at 4:09 a.m. Sunday in the St. Joseph Regional Medical Center, Plymouth.
Bob grew up in South Bend where he attended school and then moved to Plymouth where he would marry the former Ruth L. Samuels on May 30, 1943. Together they would raise four children who survive along with their spouses. They are Janet E. and Don Johnson of Highlands, Texas, Brenda “Kay” and David Bauer of Wichita, Kansas, Robert W. Murray of Indianapolis and Randall B. and Karma Murray of Plymouth. Additionally he is survived by 12 grandchildren; Gregory and Kathy Rutzen, Rhonda and Stacey Bonnell, Michele Frye, Robert W. and Audrey Murray II, Dr. Matthew and Tracey Bauer, Kelly and Beau Howard, Katina and Mike Silver, Dawne and Michael Pearson, Jason Murray, Amanda Murray, Jaymie and Billy Foy, and Joshua Murray, as well as step-granddaughters; Kim and Wayne Bean and Kelly and Drew Westafer. There are 16 great-grandchildren, 3 step-great-grandchildren, sisters Virginia and Bob Spillman of Grovertown and Jeanette Ringle of Mishawaka also survive with numerous nieces and nephews.
Preceding Bob in death was his beloved wife Ruth, who died on January 13, 2000, his parents, a granddaughter; Tori Shannon Bauer, a brother; John Elihu Murray, sisters Margaret Minor and Mardell Dodge.
Bob began his working career in Plymouth at Schlosser Bros. Creamery. He then worked for the Bendix Corp. of South Bend, served as a foreman for Pacific Hawaiian Punch Co. in Plymouth and would retire as plant manager after 30 years from Ben Hill Griffin, also located in Plymouth.
A very active and supportive person, Bob was a proud member of the Father’s Auxiliary of the VFW, he was the first Exalted Ruler of the Plymouth Elks Lodge No.2548 and former member of the Plymouth Moose Lodge No. 741.
Bob loved playing sports: golf, bowling and fast pitch softball (well known for the “long ball”). He was a South Bend table tennis champion and for many years refereed basketball and football games, umpired baseball and softball and strongly supported the Plymouth Little League program. In addition he was known to be a first rate pool shooter, horseshoe pitcher and enjoyed a good game of pinochle and poker.
His sense of humor was well known. He loved a good joke, even though he would tell you he was “joke challenged” when it came to telling them. Bob will be greatly missed by his many friends and family.
Friends and family will gather to celebrate his life from 4 – 8 p.m. on Tuesday, June 7, 2005 in the Johnson-Danielson Funeral Home, 1100 N. Michigan St., Plymouth and after 7 a.m. Wednesday, June 8th prior to services in the funeral home at 11 a.m. Pastor John Perkinson of the Shiloh Wesleyan Church will officiate. Burial will follow in the New Oakhill Cemetery, Plymouth.
Memorial gifts in memory of Bob may be made the American Diabetes Assoc., Marshall Co. Chapter, c/o Patty Hobbs, 10872 Queen Road, Plymouth, Indiana 46563