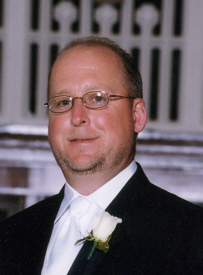 The Plymouth high school baseball program has lost one of their most ardent fans and dedicated helpers.
Robert L. “Rob” Jolly had played and worked with Plymouth baseball for over 20 years.
He was devoted to the game and loved the kids he coached and they loved him in return.
He was the Freshman/Junior Varsity assistant coach for the high school team. On Monday afternoon, hours before his death, he was at practice with the team.
Rob died unexpectedly of natural causes in the Emergency Room of Saint Joseph Regional Medical Center, Plymouth, at 6:02 a.m. on Tuesday morning, March 14, 2006 after taking ill at home.
He was 38-years-old.
Born in Plymouth on November 1, 1967, Rob is the son of Marion C. and Gladys E. (Keel) Jolly of Plymouth.
He graduated from Plymouth High School with the class of 1986. In high school he played four years of baseball, as a pitcher and third baseman, and also played four years of football and two years of play in the basketball program.
He went on to Purdue University and earned a degree in Industrial Management. Rob has worked as a Supervisor with the DelMonte Corporation of Plymouth for the past 12 years.
Since 1993, Rob has coached Yoder’s Sports Center travel team. They won three Blueberry Festival Championships.
He had served on the Tri-County Travel League Board.
His teams were like family, which became complete upon his marriage to Lisa M. Klingerman on September 25, 2004, in Plymouth, with step-son, Dyllon W. Pavey and then the birth of his now 8-month-old son, Ryan Michael Jolly.
Besides his lifelong interest in baseball, he supported PHS by going to many athletic events. He also enjoyed golf and fishing with his father and brothers – especially trips into Canada.
Rob is survived by his wife, step-son and their baby son at home, 10832 Cardinal Circle, Plymouth. Also surviving are his parents and three brothers and a sister. They are Ronald W. and Rebecca Jolly, Arizona City, Arizona; Terry A. and Sara Jolly, Plymouth; Thomas P. and Cathy Jolly, Plymouth, and Connie S. and Dennis Smith, Plymouth.
His in-laws, Curt and Jackie Klingerman, Walkerton, Indiana, two sisters-in-law; Christy (Sean) Plunkett of Mishawaka and Casey Klingerman of Walkerton survive along with several nieces and nephews and great-nieces and nephews.
Grandparents Eugene and Evelyn Runyan of North Liberty and Iris Klingerman of Walkerton, survive as well.
Rob was preceded in death by an infant brother, Douglas H. Jolly.
A time to share memories and love of Rob with his family will be held from 3 to 8 p.m. on Thursday, March 16, 2006, in the Johnson-Danielson Funeral Home, 1100 N. Michigan St., Plymouth. Visitation will also be one hour prior to the services in the church.
Funeral services for Rob will be in the Sunrise Chapel, 11802 Lincoln Highway, Plymouth, at 11 a.m. on Friday, March 17, 2006. The Rev. Charles Krieg, pastor of the Salem United Methodist Church, Bremen, the Rev. James Irwin, pastor of the Pretty Lake Trinity United Methodist Church, Plymouth and Sunrise pastor Rev. Rustin Krapfl will officiate.
Burial will follow in New Oakhill Cemetery, Plymouth.
In lieu of flowers, the family requests that memorials to Rob’s memory be made to the Plymouth Junior League Baseball, Inc., P.O. Box 55, Plymouth, Indiana 46563.