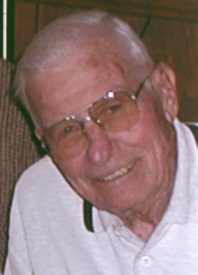 Robert M. Dodson, 89 and a Bremen resident since 1962, passed away at 6:40 p.m. on Tuesday, March 12, 2013 at Miller’s Merry Manor, Wakarusa.
Robert was born on April 16, 1923 in Plymouth to George W. and Olive R. (Schroeder) Dodson. He graduated from Plymouth High School in 1941.
On June 10, 1943, Robert married Lois Clevenger in Philadelphia, PA.
Robert enlisted into the US Navy on January 23, 1943. In the military, he served on the USS Battleship New Jersey in the Pacific during WWII. He was a Fire Controlman 3rd Class which gave him responsibility of directing guns to a target. Robert was very proud of his military life and was honorably discharged on November 5, 1945.
He worked for Bendix in Mishawaka for 25 years. Robert was an original member of a team of engineers that worked on a project whose code name was “Operation Bumble Bee”. As a result of this project it led to the creation of the TALOS missle which he helped to desdign. After retiring from Bendix in 1970, he worked as a sales representative for Buchan Aerospace Corporation. In 1978, Robert started his own machine shop, Talos Engineering, Inc. He didn’t officially retire from what he loved doing until he was in his mid-80s.
Robert enjoyed fishing on Lake Michigan and attending his children’s and grandchildren’s sporting events. His family was his life.
Robert is survived by his four children: Carleen Dils of Elkhart, Richard (Sheri) Dodson of Nappanee, Roger (Kathleen) Dodson of Franklin, and Lisa (Scott) Muncy of LaFayette; brothers, Dale and Ronald Dodson of Plymouth; and sisters, Marilyn (Harvey) Bartsch of Madison, WI, Janice Dodson of Madison, WI, Margaret Roahrig of Plymouth, and Rita Dodson of Ft. Wayne; grandchildren: Trent (Bridget) Dodson, Wesley (Teresa) Dodson, Darin Dodson, Amy (Cliff) Westwood, Eric Dils, Brock Dodson, Todd Dodson, Monica Dodson, and Matt and Megan Muncy; great-grandchildren: Ian and Katie Westwood, Ethan Dils and Quinn and Truman Dodson.
He was preceded in death by his parents, wife, Lois in 1991, brothers: Edwin, Keith, Walter, Glen and infant brother, Earl Dodson, an infant sister, Edith, and son-in-law, Stephen Dils.
Visitation will be on Sunday, March 17, 2013 from 1– 5 p.m. in the Johnson-Danielson Funeral Home, 1100 N. Michigan St., Plymouth, IN.
Funeral services will be on Monday, March 18, 2013 at 11 a.m. in the Johnson-Danielson Funeral Home. Visitation will resume one hour prior to the service in the funeral home.
Burial will be in the Oakhill Cemetery with military honors provided by members of the Bremen VFW Post 8972 and the American Legion Otho B Place Post 191.
In lieu of flowers, donations can be made to the Bremen VFW Post 8972, 1750 West Plymouth St., Bremen, IN 46506.