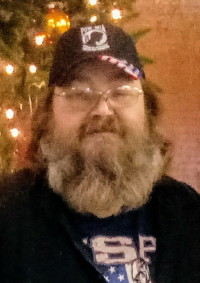 Robert R. Tolbert Jr., 50, unexpectedly passed away in his home on Friday, January 11, 2019.
Born in Indianapolis, Indiana on February 13, 1968, Robert was the son of Robert R. and Ethel (Howard) Tolbert Sr.
On May 18, 2002 in Plymouth, Robert took Toni Davis to be his wife.
He worked in the fiberglass industry and also in janitorial. He was employed at Wal-Mart until his was unable to work due to his health in 2011.
Robert is survived by his wife, Toni of Plymouth; brother, Scott Davis of Plymouth; 6 children: Ann (Jimmy) Purnell of North Liberty, Kelly (Charlie) Cruz of Winchester, KY, Kimberly Davis of Walkerton, Tina (Corey) Louzon of Walkerton, Michelle Thompson of Plymouth, and Ronald (Tammy) Davis of Walkerton. 8 grandchildren he loved and admired so much: Jordan and Chloe Kruse, Bobbie and Charlie Cruz, Solomon and Samuel Louzon, Alistar Thompson and Cassidy Perry. Also surviving are his wonderful Uncle Ronald (Robert) Jordan, nephews Joshua and Raymond Davis, and niece Nickey Davis.
He was preceded in death by his parents, Robert and Ethel Tolbert Sr., Grandmother Josephine Jordan, second mother Great Aunt Nancy Davis, second father Great Uncle Raymond Davis and Aunt Janice Meredith.
A Memorial Service will be held at 10 a.m. on Saturday, January 19, 2019 at Koontz Lake Association Clubhouse, 10870 E. Cherokee Road, Walkerton. Family will receive friends one hour prior to the service.
Memorials can be made to the National Kidney Foundation of Indiana 911 E. 86th St. Suite 100, Indianapolis, Indiana 46240.