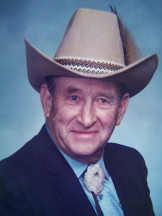 Robert S. Thomas, 99, passed away in Danville, Indiana on September 3, 2019.
Born in South Dakota on July 31, 1920, Bob was the son of Will and Lynda (Schroeder) Thomas. During his early schooling he rode his faithful horse, Nancy, to school. For high school he attended and graduated from a boarding high school in Agar, South Dakota. This required him to be away from his family throughout the winter sessions.
The Dust Bowl and the Great Depression forced the family to relocate to Plymouth, Indiana, the birthplace of his mother, making Plymouth his home in 1940. These two major events did not diminish Bobâ€™s determination to squeeze the most out of what life brought, while maintaining livestock and horses and continuing the hard work of farming. On June 7, 1944, he married Dorothy Carothers and to this union came their two children, James and Patricia.
Bob and his wife loved to travel and wintered in Arizona and Florida for many years. He was involved with Truth for Today Church in Peru, Indiana.
He is survived by his children, James (Louann) Thomas of Plymouth and Patricia (Terry) Plank of Danville, IN, as well as grandchildren: Sean, Jason and Matthew Thomas and one great-grandchild, Anna. Bob was preceded in death by Dorothy, his wife of 67 years.
Visitation will be held from 10 a.m. on Monday, September 9, 2019 at Johnson-Danielson Funeral Home, 1100 N. Michigan Street, Plymouth until the funeral services at 11:30 a.m.
His laughter and joyous attitude that Bob brought to life will be missed by all who knew him. Had you met him you would have liked him.