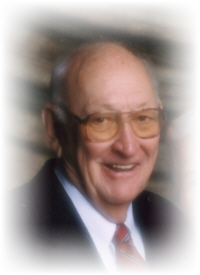 Robert Wayne Suesse, 84, passed away at his Pretty Lake home Thursday morning, July 3, 2008. His death was attributed to congestive heart failure.
Bob has resided at 16510 Pretty Lake Road since the late 70’s and is formerly a longtime Downers Grove, Illinois resident. With many boyhood trips to Pretty Lake with his parents, this area has always felt like home.
Born in Ft. Wayne, Indiana on May 24, 1924, he is the son of Charles and Josephine (Ebling) Suesse. There he graduated from Concordia High School and then received a business degree from Valparaiso University.
As a young man Bob would often work with his father on the railroad which gave him many lasting memories. At the age of 18 like many other young men he set out to serve his country during WWII in the United States Air Force. As a Sergeant he flew several missions between England and Italy.
On August 18, 1954 in Valparaiso, Bob took as his bride the former Betty Lou Claudon. After 41 wonderful years and raising two children, Betty preceded in death on August 17, 1995.
Bob was again blessed when one Caroline W. Zingle came into his life and on August 16, 1997 they would marry in the First Presbyterian Church and cherish the next 11 years with their blended families.
His career was in sales with Mobile Oil Co. from which he retired after 31 years of service and achievements.
Bob was an active member of the Plymouth First Presbyterian Church where he served many years as an Elder, the Plymouth Country Club and a former Elks Lodge member.
A man of generous character, Bob was quick to respond to the needs of others, his creative mind produced many ideas to improve the environment which became an asset to many. Bob was delighted to have recently been honored by the City of Plymouth with a Lifetime Achievement Award for the Advancement of Recycling by spearheading the curbside program in place today.
Bob took great pride in maintaining his property and the marine life at Pretty Lake. He enjoyed building things, working on his cars and boat and travel especially trips to Vero Beach, Florida and attending spring training for the L.A. Dodgers.
His beloved family includes his wife Caroline, daughter; Laura K. and husband Jeff Hintz with children; Catherine and Daniel all of Glen Ellyn, Ill., son; Charles J. and wife Karen Suesse with children; Allison and Drew all of Aurora, Ill., a step-daughter; Linda G. Zingle of Santa Fe, NM and step-son; Roger L. and wife Shari Zingle with children Max and Maddy of Boston, Mass. Several nieces and nephews also survive.
Bob was also preceded in death by his two brothers; Ralph and Chuck Suesse.
The family will receive friends from 3 – 6 p.m. Sunday, July 6th in the Johnson-Danielson Funeral Home, 1100 N. Michigan St. and after 10 a.m. Monday in the First Presbyterian Church, 401 N. Walnut St. Plymouth where services will be held at 11 a.m. with the Rev. Paul Nye officiating. A reception will follow at 12:30 in the Plymouth Country Club. Burial will be in the Graceland Cemetery, Valparaiso.
Preferred are memorial gifts in Bob’s memory to: The Center for Hospice and Palliative Care, Habitat for Humanity, M.C. Boy’s & Girls Club or the Church.