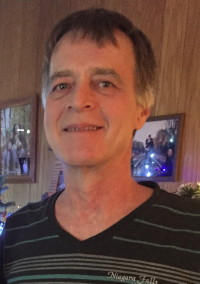 Robin D. Smith, 63, passed away unexpectedly in his home on Thursday, March 7, 2019.
Lifetime resident, Rob was born in Plymouth, Indiana on July 20, 1955 to Billy J. and Kay F. (Morgan) Smith. He graduated from Plymouth High School with the class of 1973 and then attended Indiana University for one year.
On August 2, 1980 at the First Presbyterian Church in Plymouth, Rob married Diana M. LaMunion.
He worked 30 years for Young Door/Jeld-Wen in Plymouth, ending as a supervisor. He then went to work for Zentis in Plymouth as a production worker until his retirement in July of 2018. Rob was a member of the Plymouth Moose Lodge #741.
In his younger years, Rob had a passion for volleyball, softball and bowling. He also enjoyed vacationing and fishing in Minnesota. He later enjoyed watching Wheel of Fortune and Jeopardy, being out at the farm, camping, mushroom hunting and being in the woods. Robâ€™s happiest times were traveling with his family and grandchildren. He truly adored his grandchildren. Rob is survived by his wife, Diana of Plymouth, and their children: Trenton S. (Crystal) Smith of Mentone, IN, Preston C. Smith of Rochester, IN and Trisha M. (Karl) Tillman of Niles, MI; 8 grandchildren: Tyler Smith, Blaine Smith, Hannah Smith, Logan Smith, Aiden Smith, Adelynn Tillman, Emilia Tillman and Brendal Tillman; sister, and Carol (Mike) Stockberger of Walkerton. Also surviving are sister and brother-in-laws: Joy (John) Jennings, Carol Huebner, Beverly Smith, Norman (CJ) LaMunion, Dennis (Patricia) LaMunion and Rger LaMunion.
He was preceded in death by his parents, Billy and Kay, brother, Phillip Smith, and sister-in-law, Shirley Richardson..
Visitation will be held on Tuesday, March 12, 2019 from 3-7 p.m. at the Johnson-Danielson Funeral Home, 1100 N. Michigan Street, Plymouth.
Funeral services will be held on Wednesday, March 13, 2019 at 11 a.m. at the funeral home with Rev. Charles Krieg officiating. Visitation will resume one hour prior.
Family burial will be held in the New Oak Hill Cemetery, Plymouth, at a later date.
Memorial contributions can be made to the American Heart Association, 6500 Technology Drive Ste 100, Indianapolis, IN 46278 or the ALS Association, PO Box 30722 Boone, IA 50037-0022.