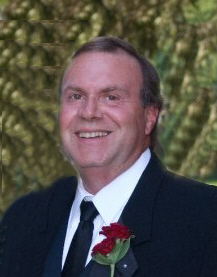 Rodney A. Morgan Sr., 58, passed away peacefully on Saturday December 28, 2013 at the Loyola University Medical Center, Maywood, Ill., from complications due to a stroke.
The son of Chet Morgan and Alma Bennett Crowder, Rod was born on April 11, 1955 in Crawfordsville, Ind. He graduated from Crawfordsville High School in 1974. Rod then went on to attend Indiana State and graduated in 1978 with a bachelor’s degree in marketing.
On November 11, 1978, Rod married Judy H. Jarvis in Terre Haute.
Rod was a sales representative for All-Green in Plymouth.
Rod was an avid boater and enjoyed playing and watching golf. He loved classic rock and often told stories about concerts, experiences and good times with friends. He was a 3-C man in sports; a fan of the Colts, Cubs and Celtics. Rod was also a jokester and loved getting new jokes from new friends. He was always the life of the party and enjoyed spending time with his family and friends. He adored his grandson, Van, and took pride that he would carry on his family name.
He is survived by his loving wife, Judy, and their two children: Rod A. (Kate) Morgan Jr. and their son, Van, of Mishawaka and their daughter, Kristie N. Morgan of Plymouth. His mother, Alma Crowder of Crawfordsville, and his siblings: Shirley (Dan) Hester of Richmond, Ind. and Rick (LeeAnn) Morgan of Attica, Ind.
Rod was preceded in death by his father and step-father, John Crowder.
Visitation will be from 5 – 7 p.m. on Thursday, January 2, 2014 in the Johnson-Danielson Funeral Home, 1100 N. Michigan Street, Plymouth. Funeral services will immediately follow at 7 in the funeral home.
Memorial contributions can be made in Rod’s honor to his family.