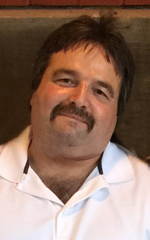 God took Rodney G. Abair, 50, home unexpectedly on Monday, October 8, 2018.
Rod was born on January 20, 1968 in Plymouth, Indiana to Gerald A. and Geraldine (Masterson) Abair. He graduated from LaVille High School with the class of 1986.
On March 22, 1990 in Plymouth, Rod married Melissa D. Mangun. They continued to make Plymouth their home while raising four children: Chad, Josh, Brandon and Breanne.
Rod or â€œHot Rodâ€ as family knew him, was a jack of all trades and loved to work with his hands. He built his own home and could usually always be found in his garage. He enjoyed doing auto body work, mechanic work and restoring old Camaros. He loved camping with his family and going to Mackinaw Island in Michigan. He adored his grandchildren and cherished memories made with his family.
Rod is survived by his loving wife, Melissa of Plymouth, and their children: Chad (Cara) Abair of LaPaz, Josh Foster (Danielle Banes) of Mishawaka, Brandon Abair of Plymouth and Breanne Abair of Plymouth; his parents, Gerald and Geraldine Abair of Plymouth; grandchildren: Karsyn, Farryn, Grasyn, Mason, Brody, Mickey and Melanie.
He is also survived by his siblings: Don (Kimberly) Abair, Timothy (Beverly) Abair and Angela (Kenneth) Polinski, all of Plymouth; aunts and uncles: Mabel Kauffman, Mary (Ronny) Atkins, Don Masterson, Fred Masterson, Dick Masterson and Jim Masterson; and several nieces, nephews, and cousins.
He was preceded in death by her maternal grandparents, Delbert and Marie Masterson, and aunt, Rita Masterson.
A Celebration of Rodâ€™s Life will be held at a later date.