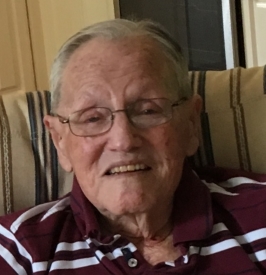 Roger A. Jacox, 95, passed away on Friday, May 10, 2019, in Kalamazoo, Michigan.
Roger was born in Argos, Indiana on June 22, 1923 to Earl D. and Marvel M. McDonald Jacox. He graduated from Lincoln High School, Plymouth, IN with the class of 1941.
Roger took Phyllis R. Rogan to be his bride on May 4, 1944 in Plymouth, Indiana. He proudly served in the Army Air Force from 1942 until 1946. The couple moved to South Bend in 1953 where he worked as an accountant for 40 years at the Associates Corporation and First Source Bank before his retirement in 1981.
The couple moved back to Plymouth in 1993, continuing as members of the First Presbyterian Church. In 2012, they would move to Kalamazoo to be near their daughter.
Roger is survived by his loving family, daughters: Patricia E. (Ray) Stradtner of Chandler, IN and Pamela A. (Gary) Zandt of Kalamazoo, MI; four grandchildren: James (Misty) Stradtner of Newburg, IN, Tonya Shadoan of Fishers, IN, Kara (Scott) VanAvery of Kalamazoo, MI and Nathan Zandt of Colorado Springs, CO; 10 great-grandchildren; and his sister, Dorothy Procaccino of Granger, IN.
He was preceded in death by his wife of 71 years Phyllis, his parents, and a grandson, Aaron Zandt.
Visitation will be from 2-3 p.m. on Tuesday, May 14, 2019 in the Johnson-Danielson Funeral Home, 1100 N. Michigan Street, Plymouth, IN. Funeral services will follow in the funeral home at 3 p.m. with Reverend Chrissy Westbury of the First Presbyterian Church of Kalamazoo, MI. Burial will follow in the New Oakhill Cemetery, with Military Honors provided by members of the American Legion Post 27, Veterans of Foreign War- Marshall County Post 1162 and Disabled American Veteran Chapter 42.
Condolences may be sent to the family through www.johnson-danielson.com. Memorials may be given to First Presbyterian Church of Kalamazoo, Kalamazoo, MI.