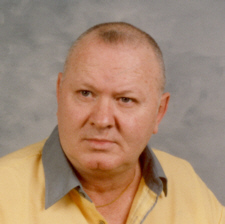 Roger A. Pearson, living with his daughter, Debra Pearson, 13451 Olive Trail, died of natural causes in St. Joseph Regional Medical Center, Plymouth, at 10:40 p.m. on Saturday, April 17, 2010. He was 76-years-old.
A lifetime Plymouth resident, Roger was born in Plymouth on November 7, 1933, the son of Amos and Ruth Smith Pearson.
Roger attended Lincoln High school and in 1953 he married Hilma Stiles in Plymouth, Indiana. Roger loved Hilma as much today as he did on his wedding day. He served his country in the United States Army and later worked as a route salesman for the Coca Cola Co. for 20 years, retiring in 1984.
Roger enjoyed bird watching, hunting and fishing. He was an expert marksman and liked traveling to Daytona Beach, Florida, to visit with his family. Roger was a sports enthusiast and also enjoyed watching horse racing.
He was a lifetime member of Moose Lodge 741. He also belonged to the Plymouth American Legion Post 27 and VFW Post 1162.
Roger is survived by three daughters: Rose M. Wilson, Daytona Beach, FL.: Debra A. Pearson, Plymouth, IN, and Ruth I. (Miguel) Briones, Deland, FL.
Six grandchildren and six great-grandchildren survive as well, together with a brother Jack (Bev) Pearson, Plymouth. Several nieces and nephews and cousins also survive.
Roger was preceded in death by his parents, wife and a brother Tom Pearson.
Friends will be welcome to share memories with Roger’s family from 3 to 7 p.m. on Wednesday, April 21, 2010, at the Johnson-Danielson Funeral Home, 1100 N. Michigan St., Plymouth.
A Loyal Order of the Moose Service for Roger will be held at 7 p.m.
Roger’s funeral will be at 11 a.m. on Thursday, April 22, 2010, in the funeral home. The Rev. Charles Krieg will officiate.
Interment will be in New Oakhill Cemetery with full military honors conducted by the Plymouth American Legion and VFW and D.A.V.
Memorial contributions may be made to the Mooseheart for Children’s Home.