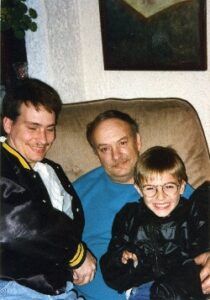 Roger A. Babcock, 69, of State Road 17, passed away suddenly in the St. Joseph Regional Medical Center’s Emergency Room.
He was born in Blue Island, Ill. on April 29, 1940; Roger was the son of William and Lena Testolin Babcock.
He graduated from Fenger High School in Chicago, Illinois, and served in the United States Coast Guard for four years.
On August 1, 1959, in North Liberty, Indiana, Roger and Carrolyne Penrod were married.
Roger was the packaging designer for various companies for 30 plus years.
A woodworker and a great cook, he loved spending time with his family especially playing with his grandchildren. He enjoyed natures many treasures along with boats, sailing, and taking care of their four cats.
He was a former member of the Sheriff’s Posse and of the Plymouth Moose Lodge #741.
Roger is survived by his wife, Carrolyne, and by their two children: Cindy (Steve) Odiorne and Jeff (Ann) Babcock, both of Plymouth.
Four grandchildren also survive: Kailey (Kenneth) Bandimere, Abigail, Hope and Samuel Babcock.
Roger was preceded in death by his parents a son, Chris Babcock, a grandson, LCpl. Cameron M. Babcock, a brother, William Babcock, Jr. Friends are invited to share memories with Roger’s family on Saturday, September 26, 2009, from 1 to 3 p.m. in the Johnson-Danielson Funeral Home, 1100 North Michigan Street, Plymouth.
A memorial service for Roger will follow the visitation at 3 p.m. in the funeral home. Pastor Les Johnson, the hospital chaplain will officiate.
Burial will be in the New Oakhill Cemetery with military honors accorded by the Plymouth VFW and the American Legion.
Memorial gifts in Roger’s name may be made to Heartland Artists in Plymouth.