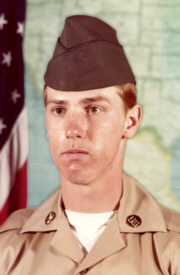 Roger L. Cunningham, 52, passed away early Sunday morning December 14, 2014 surrounded by his loving family after a sudden battle with cancer.
Born in on August 25, 1962 in Plymouth, Indiana, Roger was one of six children born to Lon S. and Mary J. (Keyser) Cunningham. He proudly served in the National Guard with his brother, Steven, as a Weekend Warrior from 1979-1985.
He worked for South Wire in Bremen in production before he fell ill.
Roger loved fishing and hunting. He enjoyed riding his motorcycle and participated in many fundraiser rides. He loved life and lent a hand to anyone he could.
He is survived by his parents, Mary and Lon Cunningham of Plymouth, and his six siblings:, Penny Jo (Larry) Cleveland of Plymouth, Steven R. (Nannette) Cunningham of Bremen, Lonnie J. (Kim) Cunningham of Plymouth, David L. Cunningham of Ionia, MI, Melanie K. (Bill) Rowe of Lakeville and step-sister, Debra S. Cunningham of Ionia, MI. Also surviving is his maternal grandmother, Donnabelle Keyser of Plymouth and many aunts, uncles, nieces and nephews.
Roger was preceded in death by his maternal grandfather, Charles Keyser and his paternal grandparents, Neva Bell and Joseph Cunningham.
Visitation will be from 11 – 1 p.m. on Wednesday, December 17, 2014 in the Johnson-Danielson Funeral Home, 1100 N. Michigan Street, Plymouth. Funeral services will immediately follow in the funeral home at 1 p.m., officiated by Pastor Rich Van Vuren of the Shiloh Wesleyan Church.
Burial will be in the New Oakhill Cemetery.