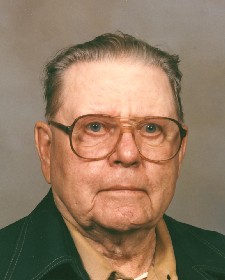 Rolland Munn, formerly of 7039 Tamarack Road, Plymouth, died of natural causes in Pilgrim Manor Nursing Home at 4:30 a.m. on Tuesday, December 5, 2006.
Rolland was 98-years-old.
Born in Plymouth on September 1, 1908, Rolland was the son of Hayes and Lettia Day Munn.
He graduated from Tyner High School with the class of 1926.
On September 21, 1929, in Plymouth, Rolland and Florence Van Pherson were married. Florence died on March 2, 1982.
A lifelong farmer, Rolland farmed 150 acres of corn and beans and raised enough hay to feed his stock. He milked cattle and fed hogs and did the hundreds of other things that farmers do.
He used horses to plow with until he could afford his first purchase of a tractor of 1946.
Rolland was a member of the Blissville Church of the Brethren.
He is survived by a son and two daughters in law: Zane and Dorothy Munn and Marian Munn, all of Plymouth.
Three grandchildren also survive. They are Doug Munn, Jeff and Shaunn Munn and Laura and Jim Vervynckt, all of Plymouth.
Eight grandchildren survive as well.
Rolland was preceded in death by his wife, a son Stephen Wayne, a brother Harold and one sister, Helen Harkess
Friends are invited to celebrate the life of Rolland Munn on Thursday, December 7, 2006, from 2 to 6 p.m. at the Johnson-Danielson Funeral Home, 1100 N. Michigan St., Plymouth. Visitation will continue after 7:00 am of Friday December 8, 2006
Funeral services will be held in the funeral home on Friday, December 8, 2006, at 1 p.m. Burial will be in New Oakhill Cemetery, Plymouth, Indiana.
Memorial gifts in Rolland’s memory may be made to a charity of the donor’s choice.
Letters of condolence and the sharing of memories may be sent to the family through www.johnson-danielson.com