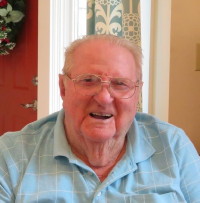 Ronald G. Johnson Sr., 79, passed away peacefully on Friday, June 26, 2020 at the Center for Hospice Care, South Bend.
Born in Chicago, Illinois on November 4, 1940, Ronald was the son of James W. and Cecile M. (Long) Johnson.
After attending Plymouth High School, he went to work in the construction industry for Panel Craft. Before retirement, he worked at Del Monte for 23 years as a Lift Truck Driver. Ronald was known as one of the biggest caregivers, being a protective covering over his children and grandchildren. He was known for always putting others needs before his own. He would never miss a school event or party that his family was involved in. Ronald would tell you that everything was okay with him, even if it really was not, so that nobody would worry about him. Ronald enjoyed riding his bike everywhere. He was a member of the First United Methodist Church in Plymouth. He is survived by his three sons: Dr. Ronald (Jacqueline) Johnson Jr. of Yuma, Arizona, Randy (Shirley) Johnson of Warsaw, IN and Ricky Johnson of Warsaw, IN; two brothers Charles and James Johnson of Plymouth, IN; half-sister Beverley Anderson of Bremen, IN; four grandchildren: Vincent Johnson of Texas, Ivy Johnson of Warsaw, IN, Levi Johnson of Yuma, Arizona and Zaine Johnson of Plymouth, IN.
Ronald was preceded in death by his parents; siblings Jack Johnson and Sandy J. Woodard; daughter-in-law Kelley (Bemish) Johnson.
Visitation will be held on Thursday July 2, 2020 from 1 p.m. to 3 p.m. at the Johnson-Danielson Funeral Home, 1100 N. Michigan Street, Plymouth Indiana 46563. A funeral service will immediately follow with Pastor Toni Carmer officiating.
Burial will take place in the New Oak Hill Cemetery, Plymouth at a later date.