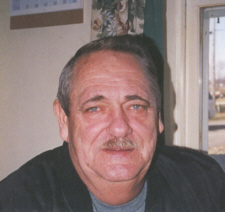 Ronald Lee Humes, 63, a Plymouth resident for the past 26 years, died at his residence, surrounded by his loving family and Hospice, on Sunday, October, 18, 2009, at 1:00 a.m.
Ron was born at home in Starke county on August 7, 1946, the son of Irvin S. and Mabel A. Dickson Humes. He had attended school in Knox.
On December 26, 1984 he married Jerry Marie Sumpter in Plymouth.
As a carpenter, Ron owned J. & R. Construction, and had worked for Humes Homes, Humes Construction and for Ron Tanner.
An avid C.B Radio fan, he went by the handle “Carpenter Boy” when talking to his many friends. He also enjoyed attending fish fries at the Gospel Lighthouse Church in Delong , IN.
Ron is survived by his wife, Jerry; five children: Michael Lee Humes of Anderson, Lori Ann and Scott Hammel of Argos, Kelly Lynn and Jesse Clark of Peru, Matthew Clayton Sumpter-Humes of Argos and Misty Marie Humes of Argos; several grandchildren; one great granddaughter; a brother, James and JoAnn Humes and a sister, Anna Mae and Leonard Messer, both of knox.
He was preceded in death by his parents; an infant child;, an infant grandson, Austin D. Overmyer; three brothers: Irvin S. Humes, Howard E. Humes, Robert Humes; and one sister: Katherine Humes.
The family will receive friends on Wednesday, October 21, 2009 from 4 – 8 p.m. in the Johnson-Danielson Funeral Home, 1100 N. Michigan St., Plymouth.
Funeral services, officiated by the Rev. Floyd Allen, will be held at 11:00 a.m. on Thursday, October 22, 2009, in the funeral home.
Burial will be in Burr Oak Cemetery.
Memorial gifts may be given to the Neighborhood Center for the Toys for Tables program.