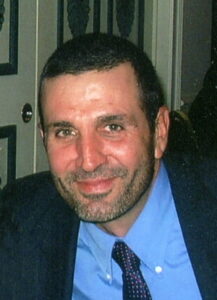 Lifetime Plymouth resident, Ronald G. Sissel, 57, passed away at his home with his family by his side at 1 p.m. on Saturday, April 3, 2021 after a brief, courageous battle with cancer.

Born on January 18, 1964 in Plymouth, Ron was the son of Dorothy (Rankin) Doczy and David R. Sissel. Ron was a talented athlete as a young man and learned skills quickly. With this, he helped his team win the 1982 Indiana State Basketball Championship, his senior year at Plymouth High School. He also excelled in high school football, as the quarterback, and in baseball, where he still holds some school records. He attained a scholarship to play baseball at Taft University in California before transferring to Anderson University in Anderson, Indiana. Ron was drafted by the Salt Lake City Trappers to play in Utah.

On February 17, 1990 in Trinity United Methodist Church in Plymouth, Ron took Ronna A. Gantz to be his wife. And soon they would welcome their daughter, Morgan.

In his adult years he continued his ability to learn new skills in the construction trade and as a skilled contractor and laborer, brought client’s dreams to life. He was working for Michiana Contracting in Plymouth as a project manager.

Ron loved reading: mysteries, history, biographies, and politics. He was always wanting to learn more and keep his mind sharp. Ron was always busy doing projects at his home and for others in need of his skills. It was hard for his girls to get him to “take a break” but for over 15 years, the family enjoyed spring breaks in New Smyrna in Florida and for the past 4 years, Naples.

He followed golf and football. Yearly, Ron participated in the Art Tomas Big Red Golf Outing. He was also a lifetime member of the Moose #741.

In one of his last healthiest days, Ron got to walk his baby girl down the aisle on October 10, 2020. He hand-made many of the items and décor for her wedding. Ron was beyond proud of the life Ronna and he had made and the beautiful daughter they had raised.

He is survived by his adoring wife of 31 years, Ronna of Plymouth, and their daughter and son-in-law, Morgan (Aaron) Landrey, of Plymouth; his mother Dorothy (Bill) Doczy of Plymouth; his brother, Robert Sissel, and his dog, Yogi.

Ron was preceded in death by his father, Dave, and his maternal grandparents, Cecil and Alice Rankin.

Funeral services will be held at 10:30 a.m. on Monday, April 12, 2021 at Johnson-Danielson Funeral Home with Sam Boys officiating. Visitation will resume one hour prior.

Memorial donations can be made to Center for Hospice Care 112 S. Center St. Plymouth IN 46563.