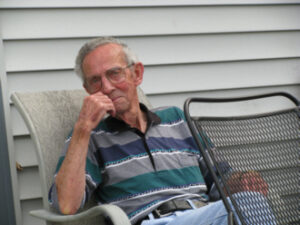 Ronald “Mouse,” Spoor, 82, passed away at 6:06 a.m. on Friday, December 2, 2011, in the St. Joseph Regional Medical Center.
A lifetime resident of Plymouth, Ron was born in Plymouth on June 25, 1929, the son of Vern and Carrie Bradford Spoor.
He attended Plymouth schools and was a proud member of the United States Marine Corps.
On August 11, 1985, in Plymouth, he and Sharon Parkus Hurford were married.
A talented construction worker he worked for C.L. Morris, Dick Day Construction and Zartman Construction.
Ron had many interests. He was a fantastic carpenter; he enjoyed hunting, fishing and gardening. He collected arrowheads and was an avid reader; he loved animals and has been known to rescue many cats.
A great family man, he enjoyed watching his grandchildren play sports.
He was a founding member of the Archery Range and the Menominee Bow Hunters Club.
Ron is survived by his devoted wife, Sharon and by their six children. They are sons: Vern (Mary) Spoor, Houston, Texas, Randy (Debbie) Spoor, Plymouth and Mike Hurford, Monterey, IN. His daughters are Terri (Gene) Frazier, North Judson and Tammi Robertson and Chris Hurford, both of Plymouth.
A sister, Helen Breitspecker of LaPorte, also survives together with 14 grandchildren, 11 great-grandchildren and several nieces and nephews.
Ron was preceded in death by his parents, a daughter-in-law, Margaret Hurford, a brother, Julius ( Florence) Spoor, a brother-in-law, Lester Breitspecker and a granddaughter, Morgan Hurford,.
Visitation with Ron’s family will be held on Wednesday, December 7, 2011 from 4 to 7 p.m. in the Johnson-Danielson Funeral Home, 1100 N. Michigan St., Plymouth.
Funeral services for Ron will be held immediately after visitation at 7 p.m. in the funeral home. Burial with full military honors will be accorded to Ron by the Plymouth American Legion, VFW and DAV along with the South Bend Honor Guard in New Oakhill Cemetery on Thursday, December 8, 2011, at 1 p.m. Memorial gifts in Ron’s memory may be made the Marshall County Humane Society P.O. Box 22 Plymouth, IN 46563