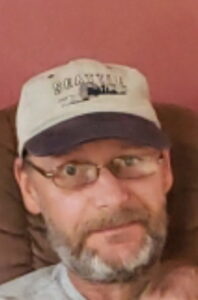 He attended Plymouth High School. Ronnie and Belinda met in the 9th grade and became high school sweethearts and they were married on January 16, 1992 at the courthouse.

Ronnie worked for Maax Tub making showers and bathtubs as well as Tom’s Tasty Tator’s making walleye sandwiches and spuds. Known as an extrovert, he loved people always acting goofy and telling a joke. He was passionate, caring and had a soft heart. He loved watching Nascar, especially Kevin Harvick. Fishing for pan fish at the Mississinewa Lake, camping, bowling, volunteering at the Blueberry Festival and taking a nap in his favorite chair.

Ronnie left a legacy for his children reminding them to always be themselves and to put their heart into everything they do.

Ronnie is preceded in death by his mother Sheila and his dog Harley.

Per the family’s request there will be a celebration of life at a later date.

Memorial contributions can be made to American Cancer Society, 30 Red Coach Dr. Mishawaka, IN 46545.