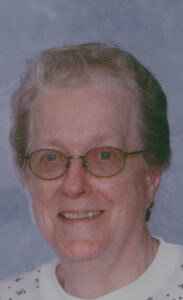 Rose Mary Horn, 76, a Plymouth area resident for most of her life, died in Miller’s Merry Manor, Plymouth, at 3:17 p.m. on Tuesday, December 12, 2006, after a long and courageous battle with cancer. Rose Mary was born in Rutland, Indiana, on March 25, 1930. She was the daughter of Gordon and Clara Althiede Snyder.
A 1948 graduate of Plymouth High School, she attended Roseland College in Illinois, majoring in nursing. She completed her degree in 1951, then working in an area hospital in Illinois until she came back to Plymouth.
In 1952, she started her career in Parkview Hospital which later became Saint Joseph Regional Medical Center, Plymouth. While there she worked in many different departments as a Registered Nurse. Rose Mary retired in 1994, after 42 ½ years of service to the hospital.
On November 27, 1966, in the Trinity United Methodist Church in Plymouth, Rose Mary became the bride of Kenneth C. Horn, Sr. They had 38 years of a loving marriage until Kenneth died on November 29, 2004.
She loved to travel and she did –all over the world. After retirement she enjoyed more traveling with her husband in the United States.
She was a member and past president of the Ladies Auxiliary of the VFW in Plymouth. She was also a member of the Beta Sigma Phi Society for many years.
Rose Mary is survived by three children: Kenneth C. Horn, Jr., Plymouth: Anne M. Overmyer, Bremen and Michael G. and Kristina Horn, also of Plymouth.
Five grandchildren also survive: Taiylor , Zackery and Riley Horn and Karson and Cord Doll, all of Plymouth.
Two brothers and one sister survive as well. They are Guilford and Iris Snyder of Plymouth: Jerome Snyder of Ohio and Daisy Stoneburner of Plymouth.
Several nieces and nephews also survive.
She was preceded in death by parents, her husband and a brother-in-law, Cecil Stoneburner.
Friends will be welcomed by the family from 4 to 7 p.m. on Sunday, December 17, 2006, at the Johnson-Danielson Funeral Home, 1100 N. Michigan St., Plymouth.
Funeral services for Rose Mary will be held at 2:30 p.m. on Monday, December 18, 2006, in the funeral home. The Rev. William Kaster, pastor of the Trinity United Methodist Church where Rose Mary was a member, will officiate.
Burial will be in Oakhill Cemetery, Plymouth.
Memorial gifts in Mary Rose’s name may be made to the Marshall County Hospice Center or to the American Cancer Society, or American Diabetes Society.