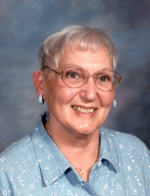 Rosemary Bergman, 501 Pennsylvania Ave., Plymouth, died, following a stroke, at 12:55 p.m. on Wednesday, February 12, 2003 , in Plymouth . She was 82 years-old. Born the daughter of Ray Oscar Scott and Nada E. Livinghouse Scott in Kokomo , Ind. , on November 25, 1920 , Rosemary lived in Plymouth almost all of her life. She graduated from Plymouth High School with the class of 1938 and attended St. Mary’s College work study program. She also attended the National Trust School at Northwestern University and took various courses at the American Institute of Banking and Indiana University South Bend . Continuing education seminars were taken by Rosemary in financial planning, finances, taxes, law and business throughout the years. She and James B. Bergman, Sr. were married in the rectory of St. Michael’s Roman Catholic Church, Plymouth, on April 17, 1942. Jim Bergman died on November 20, 1991. In 1942, Jim in the United States Army, was stationed at Merced Air Force Base in Merced , Calif. While there, Rosemary worked in the Army’s commissary office. In addition to raising her large family, she worked for 15 years as the Trust Officer for the Marshall County Bank and Trust (now 1st Source Bank). For eight years she was the branch manager of the Plymouth Auto License Branch and for five years, the office manager of Gordon Metal Products. She was a volunteer at the Marshall County Historical Museum and was the past president of Delta Theta Tau sorority, Zeta Zeta chapter and the past president of the Plymouth Business and Professional Women. Rosemary was also the first chairman of the National Association of Banking Women, Northern Indiana group. She was an elected Councilwoman for the City of Plymouth from 1984-1988 and was a past member of the Board of Directors of the Marshall Starke Development Center . For over 25 years, Rosemary served on the Smelser and Stanley Scholarship Committee for Plymouth High School , resigning in 1998. She loved her sons and they adored her. For years, she never missed a Plymouth High School football or basketball game. She enjoyed watching TV football games, was a staunch Notre Dame fan and played a good game of golf and bridge. She liked to play Monopoly, travel and be with her family and friends. Rosemary and Harriet Scheetz formed the first PTA at St. Michael’s Catholic School and were responsible for providing hot lunches in the 1950’s. A faithful member of St. Michael’s Roman Catholic Church for over 60 years, she was a former member of the Altar and Rosary Society. Rosemary is survived by five sons and their families. They are: Earl (Pam) Smith, South Pasadena, Fla,; James B. (Laura) Bergman Jr., West Palm Beach, Fla.; Michael L. (Shirley) Bergman, Alexandria, Va.; John S. (Janet) Bergman, Fishers, Ind., and Richard “Dick” Bergman, Playa Del Rey, Calif. Thirteen grandchildren and seven great-grandchildren also survive, together with several nieces and nephews. Rosemary was preceded in death by her parents; Jim, her beloved husband of 39 years and by their infant daughter, Frances Elizabeth Bergman. Two brothers, Howard and Edwin Scott have also died. Friends may gather to celebrate her life from 4 to 8 p.m. on Friday, February 14, 2003 , at the Johnson-Danielson Funeral Home, 1100 N. Michigan St. , Plymouth . The Mass of Christian Burial for Rosemary will be at 9 a.m. on Saturday, February 15, 2003 , in St. Michael’s Roman Catholic Church, 625 N. Center St. , Plymouth . Interment will be in St. Michael’s Cemetery, Plymouth . Gifts in Rosemary’s memory may be made to St. Michael’s Roman Catholic Church.