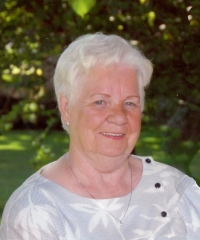 Rosemary E. Brockus, 88, passed away April 13, 2019, surrounded by her loving family. She was born on April 9, 1931, on her family farm in Tippecanoe, IN, to Durward B. and Edna L. (Williams) Shaffer, where she was one of seven girls and two boys. Rosemary was educated in the Argos school systems, graduating in 1947. Rosemary married Bert J. Brockus in Argos, IN on August 12, 1950. He predeceased her on June 2, 2004. The couple would be blessed with two children, Brent and Brenda.
Rosemary worked at Felkeâ€™s Florist in Plymouth, IN as a floral designer for greater than 35 years. She has always been a Marshall County resident.
She loved to play Euchre, enjoying her time with friends and family. In earlier years she traveled with Bert throughout Europe, notably Switzerland and Germany and after his passing, she continued the tradition and traveled to Hawaii with her daughter. Rosemary was the ultimate caretaker and took care of all her family members when under the weather. Rosemary was the true meaning of unconditional love, she was home. Rosemary deeply loved her family, especially adoring her grandchildren and their families. She was blessed with four grandchildren, five great-grandchildren, and three great-great-grandchildren. She is survived by her daughter Brenda (the late Ronald) Meyers; her grandchildren, Amy (Andy) Millar, Bret Brockus, Elizabeth (Mike) Lloyd, and Erica (Eric) Clapp; her great-grandchildren, Bryantle Brockus, Kyle Brockus, Leo Lloyd, Quinn Lloyd, and Joslyn Clapp; great-great-grandchildren Kendall, Benjamin, and Zoey Brockus; her sisters Virginia Birkey, Damaris Torres, Karen Mendenhall, and Millie Shaffer and sister-in-law Marcelle Shaffer.
She was preceded in death by her parents; her husband of 54 years Bert; son Brent; son-in-law Ronald Meyers; brothers Victor and Dee Shaffer; sisters, Jenice Shaffer and Pat Hensley, and brother-in-law Ron Mendenhall.
Visitation will be held on Wednesday, April 17, 2019, at the Johnson-Danielson Funeral Home, 1100 N. Michigan Street, Plymouth, from 9 am until 11 am with the service at 11 am. with Father John S. Korcsmar, CSC officiating. Burial will be immediately following at the New Oak Hill Cemetery, Plymouth, IN.
Memorial contributions can be made to the Alzheimerâ€™s Association, 225 N. Michigan Ave. Floor 17 Chicago, IL 60601 or Heartland Hospice 230 W Catalpa Dr Ste D, Mishawaka, IN 46545