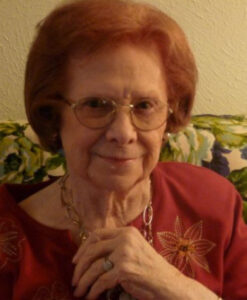 Rosemary Kaufman, 88, a River Park resident in Plymouth, passed away at 9:10 a.m. Wednesday, August 24, 2011 at her home in the care of her family and the Center for Hospice Care. She resided in the Plymouth area her entire life.
Rosemary was born in LaPaz, Ind. on November 24, 1922. She was the daughter of Harley and Pearl Sarber.
On Oct. 12, 1941, in LaPaz, Rosemary and Dale Kaufman were married. They lived in the Plymouth area their entire lives.
Rosemary was a dedicated housewife and mother and helped with the Standard Oil business.
Her husband, Dale, died on September 1, 1993.
Rosemary is survived by two sons: Rodger (Doreen) Kaufman, Anderson, S.C. and Jeffrey (Bernie) Kaufman, Mesa, Ariz.
Four grandchildren and eight great-grandchildren survive as well. They are Rodger and Doreen’s children: Melissa Kaufman-Lovell and Christina Kaufman-Brown and Jeff and Bernie’s children: Amanda Jacob and Matthew Kaufman.
A sister, Mardelle VanVactor, Plymouth, also survives, along with two nephews and a niece: Gary and Brent Kaufman and Sharon Feitz.
Rosemary was preceded in death by her parents, her husband Dale and a sister, Lucille Peters Ward, a niece Sidna Martindale and a granddaughter, Monica Boudway.
Services will be held in the Johnson-Danielson Funeral Home, 1100 N. Michigan St., Plymouth at 2 p.m. on Saturday, August 27, 2011. Visitation will begin at noon until the time of services.
Burial will follow in the Oakhill Cemetery.
Memorial gifts in Rosemary’s name may be made to The Center for Hospice Care 112 South Center Street Plymouth, Indiana 46563 or to the Cancer Association of Marshall County 9739 Sunnyside Drive Plymouth, Indiana 46563