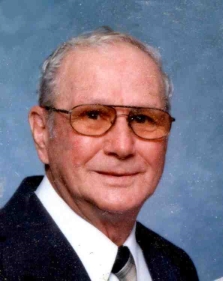 Rowdy James Rensberger of Argos, Indiana passed away on February 28, 2019. Rowdy was born on January 1st, 1927 to John Samuel and Pearl May (Chaney) Rensberger in Laporte, IN. He graduated from Monterey High School, Class of 1945. He then continued his studies at Purdue University. He enlisted in the Army, served in the Korean War, and was awarded a Purple Heart for injuries received in combat. Rowdy married Madeline Jean Master on February 21, 1953 in Monterey, IN. She preceded him in death on July 22, 2018. They were blessed with four children from the union. Rowdy was a farmer who raised cattle, swine and Belgian draft horses. Rowdy and his brother Herman ran a milk hauling business for many years. Rowdy enjoyed hunting and fishing and entertaining guests at the â€œShackâ€. He found joy in harvesting walnuts and playing cards with his friends and family. Rowdy is survived by his children Mike and Kathy Rensberger of Starke, FL, Ron and Pat Rensberger of Argos, Karen and Ken Weiland of Olmsted Falls, OH, Edward and Cana Rensberger of Starke, FL; sister-in-laws Alberta Wilcockson of Plymouth, IN and Evelyn Rensberger of Rochester, IN; several grandchildren and great-grandchildren, and many friends and other relatives. He was preceded in death by his parents Sam and Pearl, his wife Madeline Jean, three brothers, and one sister. Services will be held at a later date. The Johnson-Danielson website will be updated at that time.
Memorial donations can be made in Rowdyâ€™s name to the Argos Public Library, 142 N. Michigan Street, Argos, IN 46501.