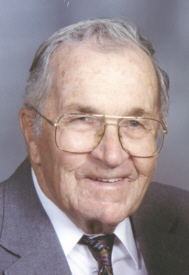 Roy Howard Freeman died on March 3, 2013 at Southfield Village, South Bend, where he had lived for the past 8 years. Roy was born June 2, 1917 to Howard and Iva (Gorsline) Freeman in Walkerton. His only sibling, Mary Doan, is deceased.
Roy graduated from Tyner High School in 1935. It was there that he met Helen Hoover, whom he married in 1938. They shared 73 wonderful years of marriage before her death in 2011, living in St. Joseph or Marshall Counties all their married life. Roy was the father of four children: Duane (Joan Fricker), deceased; Gary, deceased; Shirley Braner and Mary Ann Haysley (David, deceased), in addition to being a foster parent to numerous young children.
Roy was an active member of the Pine Creek Church of the Brethren all his adult life, until health issues prevented attendance and participation. He and Helen served as lifetime deacons. In his younger days, Roy was church Treasurer. Roy was active in the Walkerton community and was a member of the Walkerton Lions Club. One year he chaired the Walkerton Summer Festival. In their early marriage, Roy & Helen purchased a small farm and became somewhat self-sufficient, raising a huge garden for much of their food, as well as a few cattle and pigs. They bought baby chicks each spring and raised them to sell eggs.
Roy was a carpenter most of his lifetime. In later years, he changed professions and sold cars at the dealership in Walkerton. It was a job he truly enjoyed. After retirement he continued to work part time jobs (usually driving positions) during summer months and spent winters in Florida for several years.
Roy loved to bowl and he and Helen were on several leagues and bowled 2 – 3 times each week, between South Bend and Plymouth.
Life brought many changes and as Roy began to lose is sight, giving up driving was most difficult for him. He always enjoyed driving and was the first to volunteer whether going locally or on a trip.
A memorial service will be held on Sunday, March 10 at 2:00 p.m. at the Pine Creek Church of the Brethren, Pine and Stanton Roads, North Liberty. The family will receive friends at the church one hour prior to the service.
Roy’s body was donated to Indiana University Medical School. In lieu of flowers, the family requests memorials to the Pine Creek Church or another charity of choice.