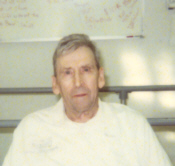 Roy H. Morlock, 89, a lifetime Plymouth resident died of natural causes at 6:25 p.m., on Thursday, July 17, 2003, in Miller’s Merry Manor. Roy had been a resident of Shady Rest from August of 1993 until 1999 when he moved to Miller’s.
Born in Plymouth on January 10, 1914, he was the son of Howard S. and Ethel D. Ringer Morlock. He was married to Jennie M. Snyder
A self-employed farmer all of his life, he farmed at 9167 Sycamore Rd., Plymouth. He was a school bus driver for West High School and later for Plymouth High School. Roy enjoyed planting his garden and milking his cows, along with many other chores around the farm. Roy is survived by his two children: John A. and Christina Morlock, Plymouth, and Joy Ellen and Foster Davenport, of LaPaz.
Five grandchildren and four great-grandchildren also survive together with a brother, Floyd A. Morlock, Plymouth.
He was preceded in death by his parents and a sister and brother-in-law, Dorothy and Darrell Carlisle, and a sister-in-law, Shirley M. Morlock, all of Plymouth.
Visitation will be at the Johnson-Danielson Funeral Home, 1100 N. Michigan St., Plymouth, from 12 to 2 p.m. on Monday, July 21, 2003.
Funeral services will follow visitation in the funeral home at 2 p.m. The Rev. Ronald Humphrey, pastor of the House of Prayer, where Roy attended worship services, will officiate.
Burial will be in New Oakhill Cemetery, Plymouth, Indiana.
Memorial gifts may be made to Miller’s Merry Manor.