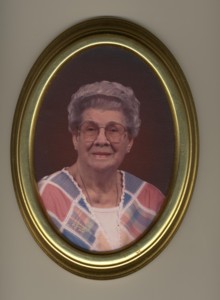 Ruby B. Saltsgiver, 94, went home to her Lord and Savior on Sunday morning, May 10th 2009. She died peacefully in the company of her family at the Catherine Kasper Life Center, Donaldson, Indiana where she has made her home for the past six years. Ruby had lived in Cape Coral, then, Bradenton, Florida for 31 years before returning to the Plymouth area.
She was born the daughter of William Wilson and Pearl Mae (Arnold) Hoover on March 14th 1915 in South Bend, Indiana. She along with her four siblings were raised in St. Joseph County and she graduated with the Mishawaka High School Class of 1933.
On December 3rd 1934, in Mishawaka, she married Vernon C. “Salty” Saltsgiver. He would precede her in death on December 12th 1991 after 57 years together. They enjoyed traveling to different states as Vern was a partner of Ritz Craft, Inc. Vern was in charge of opening new locations in the growing manufactured housing industry with plants in Neligh, Nebraska, McPherson, Kansas, Mifflinburg, Penn. and Batavia, New York. Vern retired at the age of 55, and they moved to Florida. Ruby loved her Westside Christian Church in Bradenton, Florida and taught the ladies to make lap quilts for various senior retirement homes and nursing homes.
Along with being a wife, mother and homemaker, Ruby was an avid “crafter” during her life. She enjoyed quilting, knitting, crochet, tatting, sewing, and more. She was recognized by the State of Florida many times for her teaching of quilting to various homemaker groups and received her Master Quilter’s certificate. She would travel many counties teaching her crafts and served as an officer in the Florida Extension Service for many years.
Ruby is survived by her three children, six grandchildren, eight great grandchildren and two great-great grandchildren they are: Richard Vernon Saltsgiver and his wife, Marjean of Bradenton, Florida, and their daughter Jackie and husband Ronnie Van Ostenbridge and children; Casey (Brian) Russell and their children, Haley and Hannah and Carrie Van Ostenbridge. Thomas Marion Saltsgiver and his wife, Jo Ann, of Williamsport, Penn., and family; Richard Saltsgiver and Curtis (Laurie) Saltsgiver and children Tara and Joshua Saltsgiver. Barbara Joan Danielson and her husband, Robert of Plymouth, Indiana and family; Timothy (Kellie) Danielson and son, Matthew; Scott (Yunhan Su) Danielson and son, Ian; Stacy (Patrick) Turley and children, Mitchell and Madison.
Also surviving is one sister, Evelyn Fishburn of Haslett, Michigan.
Those family members preceding Ruby in their “destination home” were, of course, the love of her life, her husband; Vern, her parents; William and Pearl Hoover, a sister; Elaine Wagner, and two brothers; Eugene and Bill Hoover.
Services will be conducted at noon on Saturday, May 16th in the Johnson-Danielson Funeral Home, 1100 N. Michigan St., Plymouth where friends may visit with family members from 10 a.m. until noon. The Rev. Charles Krieg will officiate. Burial will follow in the Mt. Pleasant Cemetery, South Bend.
Memorial gifts may be made to any chapter of the American Heart Association.