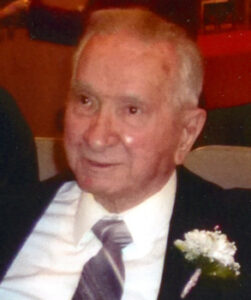 Russell D. Gordon, 94, a Plymouth resident passed away suddenly of natural causes at his home Friday afternoon at 3:35 p.m.
Born in Gary, IN, on September 24, 1919 he was the son of Dennis J. and Bertha (Schwalbe) Gordon. He received his diploma from Gary’s Emerson High School.
On December 18, 1948 in Crown Point, IN he married Jewell O. Malone she would precede Russell in death on April 4, 2010.
Russell was very proud of his military career. He was an Army veteran of W.W.II serving in the Special Forces an elite group better known as the Devil’s Brigade. While serving he was awarded the Bronze Star and Purple Heart.
He worked at U.S. Steel in the sheet and tin plant as a painter for 35 years and retired in 1981. Russell was quite the artist; he loved painting a variety of mediums especially landscapes. He loved fishing, camping and a lively debate. He was a member of the V.F.W. – Marshall County Post 1162, American Legion Post #27 and D.A.V. Post #42 life member as well as the 1st Special Forces Service Assoc. Russell and Jewell had five children; Brenda Filla, Lake Station, IN; Gloria (Jimmy) Buchmeier, Lowell IN; Richard Gordon of Virginia; Dolores (Frank) Cutlip, Demotte IN. and Marsha (Raymond) Humphrey, Plymouth IN. There are ten grandchildren and fourteen great grandchildren as well as a sister Lorraine Kehoe, Valparaiso, IN.
On February 14, 2013 Russell married Margaret J. Ryals in Hobart IN. His extended family includes; Janet (Patrick) Lindquist, Carmel IN; Debora (Carl) Olejniczek, Portage, IN; as well as two grandchildren and two great grandchildren.
Russell was preceded in death by his parents; spouse Jewell and sister Shirley Franzitta.
Visitation will be from 4:00 – 8:00 p.m. EDT on Tuesday May 13, 2014 at the Johnson–Danielson Funeral Home 1100 N. Michigan Street, Plymouth, IN.46563
Funeral services will be held on Wednesday, May 14, 2014 in the funeral home at 11:00 a.m. EDT. Pastor Richard Brown of the First Baptist Church, Hobart will officiate.
Burial will follow at the New Oakhill Cemetery, Plymouth with military honors provided by members of the V.F.W., American Legion and D.A.V.
Memorial contributions in Russell’s name may be given to Wounded Warrior’s Project P.O. Box 758517 Topeka Kansas 66675 or the Disabled American Veteran’s Assoc. c/o 4632 Queen Road, Plymouth, IN 46563.