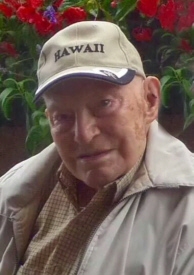 Russell E. Markley, 101, passed away in his home on Thursday evening December 4, 2014 with his family at his side.
Born on February 16, 1913 in West Township in Marshall County, Russell was the son of Jess and Estella (Morlock) Markley. He graduated with the class of 1931 from West High School. After graduation he worked on the home farm and on a neighboring farm.
On June 6, 1937 he married Bernice Swihart in the Walnut Church of Brethren in Argos. On their second anniversary, their only daughter, Sue Ellen would be born. After 61 years of marriage, Bernice would precede him in death on May 11, 1998.
In early in 1937 Russell joined the Major Brothers Meat Packing Company in Mishawaka, and then he moved on to Plymouth Community Food Storage at the corner of Plum and Garro Streets in Plymouth. This was the first plant in Indiana to rent lockers to customers to store frozen items in. After spending 25 years with the company, he built Markley’s Processing that was located on Markley Drive. After 15 years he sold his company and began hauling livestock locally for another 25 years before officially retiring. During those years of pulling the red trailer with his red truck, he always kept in contact with his wife Bernice using a CD radio. Among his many joys of life, gardening was one of his favorites. Russell made many trips to the garden on his little red scooter. When he was sold the scooter, the salesman told him it was not built for heavy outdoor terrain. Russell ignored this comment then wondered later why it all of the sudden stopped working one day when he was ready to pick beans and corn with his daughter and son-in-law.
Russell had a special little friend named Lilly, a Chihuahua that always sat on his lap. Russell loved to pick on his grandkids, always following with a huge smile. He was a Chicago Cubs fan, although his family wasn’t sure why. He enjoyed listening to the Plymouth sports on Friday night on the radio and he was an avid reader, his favorites being the Bible, westerns, and mysteries. He is survived by his daughter, Sue Ellen (Glen) Mitchell of Plymouth, their children Ronald G. (Christina) Mitchell of Plymouth and Pamela (Rick) Oller of Gilbert, AZ; great-grandchildren: Amanda (Heith) Gilcrease, Lynndi (Leif) Montgomery, Katherine (Grant) Milliser, Melinda (John) Vellasquez , Marla Ruth (Sendio) Martz and Mitchell Mark – Lee Oller; and 8 great-great grandchildren.
Russell was preceded in death by his wife Bernice, his parents, one brother Glen Markley and two sisters Laura Odell and Jessie Tillman.
Visitation will be held on Tuesday, December 9, 2014 from 4:00-8:00 p.m. in the Johnson – Danielson Funeral Home, 1100 N. Michigan Street, Plymouth.
Funeral Services will be held at 1 p.m. on Wednesday, December 10, 2014 in the funeral home, officiated by Revs. Rick Oller and Glen Mitchell. Visitation will resume one hour prior to the service in the funeral home.
Burial will be in the New Oakhill Cemetery.
Memorial contributions can be made to the Marshall County Humane Society, P.O. Box 22, Plymouth, IN 46563.