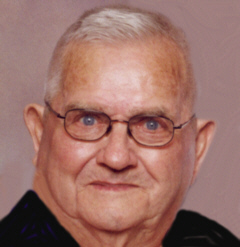 Russell “Paul” Pontius, 91 of Winter Haven, Florida, formerly of Walkerton, Indiana passed away Friday, January 14, 2011 at his residence.
He was born July 19, 1919 in Walkerton, Indiana to the late Lawrence and Lucy Kilian Pontius.
On November 8, 1940, Paul married Irene Cox who passed away in October of 1979. Paul and Helen Hundt were married in October of 1981 and she passed away in May of 1997. In June of 2000, Paul married Phyllis June Reim who survives. He was a retired Truck driver for Del Monte and was a member of the Teegarden United Methodist church, before he moved to Florida in 2000.
Paul is survived by his wife, Phyllis June Pontius and three daughters and four sons; Evelyn (Bob) Smith, Lake Wales, Florida, Wayne (La Jean) Pontius, Winter Haven, Florida, Barbara Keith, North Liberty, Indiana, Larry (Karen) Pontius, Plymouth, Indiana, Allen (Donna) Pontius, Plymouth, Indiana, Carol (Bob) Duncan, Milford, Indiana and Mark (Beth) Pontius, Argos, Indiana.
He is also survived by a number of stepchildren,18 grandchildren, 28 great-grandchildren and 2 great-great grandchildren.
He was preceded in death by two sons, Jay and James and a great-granddaughter, Addison Cummings.
Friends are invited to share memories with Paul’s family on Wednesday, January 19, 2011, from 4 to 8 p.m. at the Johnson-Danielson Funeral Home, 1100 N. Michigan St., Plymouth.
Funeral services, officiated by Pastor Tim Davis of the Teegarden United Methodist Church, will be held in the funeral home at 10:30 a.m. on Thursday, January 20, 2011. Burial will be in New Oakhill Cemetery, Plymouth, Indiana.
Memorials may be made to the Center for Hospice Care 112 South Center Street Plymouth, Indiana 46563
Funeral Director – Kevin L. Russell – ph. 574-936-2829