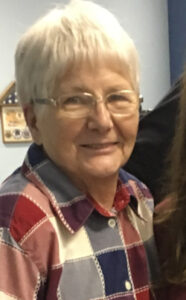 Ruth Ann Huff, 79, of Plymouth, passed away unexpectedly Thursday, September 21st of natural causes in her home.
Ruth Ann was born in Connellsville, PA., August 29, 1938, the daughter of Warren and Beulah (Anderson) Breakiron.
On October 3, 1954, in Connellsville, Ruth Ann and Cecil R. Huff were married; he preceded her in death on August 21, 2013.
In 1970 the family moved to the north side of Plymouth, Indiana and established their home.
Ruth Ann worked at American Optical for seven years in Plymouth, Indiana. Her greatest pride was being a homemaker and caring for her children and grandchildren.
Surviving are her five children. They are Rick A. (Donna) Huff of LaPaz, Deborah L. (Herbert) Stump of Lakeville, Greg L. (Susan) Huff of Plymouth, Jeff W. Huff of McComb, Ohio, and Pam S. and (Wayne) Spaich of Plymouth. Also surviving are her siblings; Robert â€œBobâ€ W. (Nancy) Breakiron of Indian Head, PA., Georgia Eileen (Fred) Duerr of San Antonio, TX.
Thirteen grandchildren, twenty-three great-grandchildren, three great-great-grandchildren, five step-grandchildren and nine step-great-grandchildren plus numerous nieces and nephews and close friends survive.
Ruth Ann was preceded in death by her parents; Warren and Beulah Breakiron, husband; Cecil R. Huff, son; Douglas R. Huff in 1987, two brothers; Charles â€œChuckâ€ and James â€œJimâ€ Breakiron, one granddaughter; Amonda and one great-great-granddaughter; Zaylee.
Visitation will be from 11:00 AM until 1:00 PM on Tuesday, September 26, 2017 in the Johnson-Danielson funeral home, 1100 North Michigan Street, Plymouth, Indiana 46563. Funeral services will immediately follow at 1:00 PM on Tuesday in the funeral home. Pastor Brian White of the Lakeville United Methodist Church will officiate. A meal will be provided following services at the church for family and friends.
Burial will be in the Fair Cemetery, North Liberty.
Memorial contributions may be directed to the Riley Childrenâ€™s Hospital, 705 Riley Hospital Drive, Indianapolis, Indiana 46202.