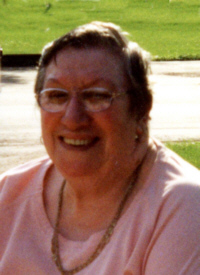 Ruth H. Baker, 87, passed away at 3:40 a.m. on Monday, December 08, 2014 at Miller’s Merry Manor, Walkerton.
Born on September 17, 1927 in St. Joseph, Michigan, Ruth was the daughter of Paul L. and Ella (Michael) Hemingway. She graduated from St. Joseph High School in St. Joseph, Michigan and then furthered her education at Blodgett Nursing Academy in Grand Rapids, graduating with her Bachelors of Science and Nursing.
On August 16, 1952, Ruth married Frederick H. Baker in Trinity Lutheran Church in St. Joseph, Michigan. He would precede her in death on January 10, 1996.
She worked as an industrial nurse in southwestern Michigan for several companies and as a corporate nurse for Whirlpool Company in Benton Harbor. Ruth then became the director of nursing at Shoreham Terrace in St. Joseph, Michigan, and after the couple moved to Eustis, Florida, she was the director of nursing for a convalescent center in Florida. She retired from Waterman Hospital in Eustis, Florida as a nurse in the ICU-CCU unit and moved back to the Michiana area in 1994.
In her younger years, Ruth enjoyed golfing and bowling. And in her later life, loved reading and macro-mea. She was a very proud member of the Daughters of the American Revolution, a former member of the Trinity Lutheran Church in St. Joseph, MI, and of the Faith Lutheran Church in Eustis, FL.
She is survived by her loving children: daughter Suzanne (Jerry) Smith of Plymouth and their children, Ryan and Jenna Wood, both of Plymouth, Jessica Hawkins of IL and Lauren Smith of North Webster, IN, son Jonathan (Terri) Baker of Osceola, IN and their children, Jaimee and Jori or Tampa, FL and Brandon of Osceola, daughter Bette Baker of Plymouth, son William “Bill” Baker of Lawrenceburg, TN and daughter Lynda Baker of Grand Rapids, MI; sister-in-law, Edna Hemingway of Katy, TX; and cousins, nieces and nephews.
Ruth was preceded in death by her parents, husband Frederick, brother Donald Paul on November 4, 2014, and granddaughter Heather Marie Baker in June 12, 2012.
Family will receive friends from 6-7 p.m. on Thursday, December 11, 2014 in the Johnson-Danielson Funeral Home, 1100 N. Michigan Street, Plymouth. Funeral services will immediately follow in the funeral home at 7 p.m.
In lieu of flowers, memorial contributions can be made to the American Cancer Association, PO Box 22718 Oklahoma City, Oklahoma, 73123-1718.