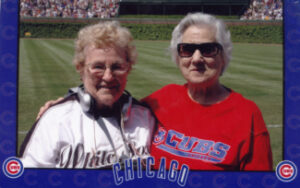 Ruth I. Rensberger, 85, formerly of Windmill Park, Plymouth, a lifetime area resident, died in the Meadowvale Care Center in Bluffton, Indiana on Wednesday, Nov. 10, 2010, at 6:45 a.m. She had resided with her sister Mary Alice Workman in Bluffton after experiencing failing health.
Born in Tyner, IN. on January 5, 1925, she was the daughter of John and Ruby (Jones) Baker. She graduated from Tyner High School.
On May 9, 1944, in Plymouth, Ruth and Herman C. Rensberger were married. Herman died on May 18, 1999.
Ruth had worked as a part-time cafeteria worker in the Argos Elementary School for 10 years. For 22 years, she was also in the circulation department of the Plymouth Pilot News. She then retired in 1989.
Her hobby was bowling. She attended the Plymouth Wesleyan Church.
Ruth is survived by her sister Mary Alice, and sisters-in-law: Betty Baker of Plymouth, Phyllis Baker of Round Lake, Illinois.
Several nieces and nephews survive as well.
She was preceded in death by two brothers: George and Vern Baker and a sister: Goldie Street.
Friends are invited to visit with her family from 11 to 1 p.m. on Sunday, Nov. 14, 2010 in the Johnson-Danielson Funeral Home, 1100 N. Michigan St., Plymouth.
Funeral services for Ruth will follow the visitation at 1 p.m. The Rev. Ed Friberg, senior’s pastor of the Plymouth Wesleyan Church and Rev. George Killian will officiate.
Burial will follow in New Oakhill Cemetery, Plymouth.
Memorial gifts in Ruth’s name to the Plymouth Wesleyan Church, 11203 S. Michigan Road, Plymouth, Indiana 46563 or the charity of donor’s choice