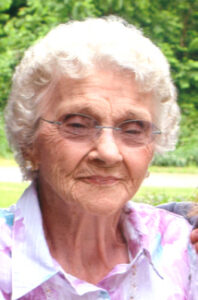 Ruth L. Andrews, 93, a 3rd Road Bremen resident, passed away following an illness, at her home at 2:12 P.M. on Saturday, January 5, 2013.
Ruth was born in Argos, Indiana on the 22nd of June in 1919. She was the daughter of Frank S. and Golie A. (Stults) Ruffing.
She graduated from Argos High School in 1938.
On February 11, 1939, in Argos, Ruth and Donald E. Andrews were married. The family moved to their Bremen farm in 1945. Donald passed away, after 70 years of marriage, in May of 2009.
A very active woman, Ruth was an accomplished homemaker active in running the farm. She maintained the bookwork and often drove the grain truck. Ruth loved gardening vegetables and flowers. Many enjoyed her wonderful cooking, she baked lovely and delicious wedding cakes. She enjoyed mushroom hunting as well as scouting for arrowheads. A rescue animal advocate, she sheltered her kitties, pet dog Taco a Chihuahua and also cared for the Marten houses on the property. Ruth also enjoyed Country Western music.
Ruth is survived by three daughters. They are: Linda A. (Robert) Annis, Remington, Indiana, Donna R. Miller, Bremen and Sandra K. (David) Lawton of South Bend. Five grandchildren also survive. They are: Christine (Jim) Thayer, Monticello, IN, Julie (Barry) Litt, Longmont, CO., Shelly Hall, Plymouth, Shawn (Angie) Reed, Plymouth and Shane (Leila) Reed, Lebanon, IN.
Eight great-grandchildren survive as well. They are: Koen, Mikayla, Jared, Amanda, Kait, Shelby, Blake and Morgan.
Ruth, in addition to her husband and parents, was preceded in death by three brothers and one sister.
Visitation for Ruth will be held on Tuesday, January 8th, 2013, from 4 to 8 p.m. in the Johnson-Danielson Funeral Home, 1100 North Michigan Street, Plymouth and for one hour prior to funeral services to be held in the funeral home on Wednesday, January 9th, 2013, at 11 a.m. The Rev. John Perkinson pastor of the Shiloh Wesleyan Church will officiate.
Interment will follow funeral services in the New Oakhill Cemetery.
Memorial gifts in Ruth’s memory may be made to The Center for Hospice Care Center 112 S. Center St., Plymouth, IN 46563 or the Marshall County Humane Society P.O. Box 22, Plymouth, IN 46563.