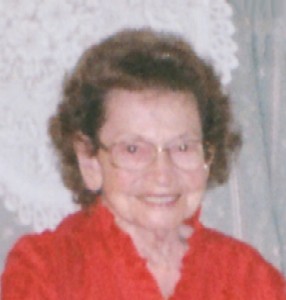 Ruth L. Johnston, 87, of 805 Baker Street, Lot 82, died of natural causes at 7:30 p.m. on Friday, October 20, 2006.
She was known as a loving and kind Christian person and was always a devoted caregiver to those who were in need of help.
Born on October 15, 1919, in North Liberty, Indiana, she was the daughter of Lawrence D. and Nora Mae Stump Baughman. She was raised near the Pine Creek Church and also resided for a time in the areas of Walkerton and Bremen.
A graduate of North Liberty High School with the class of 1937, Ruth graduated from the South Bend Business College.
In April of 1942, in Biloxi, Mississippi, Ruth and Elmer M. Johnston were married. Elmer died in 1982.
Ruth worked during World War II at Kingsbury Munitions Plant and afterwards, for 23 years, until her retirement in 1983, at Wagner’s Wire in Plymouth.
She loved to read and enjoyed gardening, working with plants and flowers and of greatest importance: her church and being with family, especially her many grandchildren. She loved to sing and when younger, played the piano and was artistic at making a number of crafts.
Very involved in her church life, Ruth was a lifetime member of the Pine Creek Church of the Brethren.
She is survived by two sons and a daughter. One son is Robert Elmer Johnston and grandchildren, Fred L. Johnston, both of Corpus Christi, Texas, and Robert E. Johnston, Uvalde, Texas, and six great-grandchildren.
Also surviving is her son, Kerry Lynn Johnston of Walkerton, Indiana and grandchildren Amanda Johnston, Morning View, Kentucky: Caramia Moore, Anderson, Indiana, and Melinda Johnston, Plymouth, Indiana and one great grandchild.
Ruth’s daughter, Phyllis Sue and her husband, Bill, Bayne, live in Plymouth. Their children are: Kim Hughes, Plymouth and Mike Bayne of Mishawaka, with 7 great-grandchildren and two great-great-grandchildren.
Ruth was preceded in death by her parents, her spouse, a daughter-in-law, Virginia Johnston, and Warren Baughman, a brother.
The family will welcome visitors on Monday, October 23, 2006, from 4 to 8 p.m. in the Johnson-Danielson Funeral Home, 1100 N. Michigan St., Plymouth. Friends may also call on Tuesday morning for one hour prior to services at the church.
Funeral services for Ruth will be held at 10:30 a.m. on Tuesday, October 24, 2006, at the Pine Creek Church of the Brethren, 69531 Pine Road, North Liberty, Indiana. Pastor, Norman Replogle, will officiate.
Burial will be in Fair Cemetery, North Liberty.
Memorial gifts in Ruth’s memory may be made to the Pine Creek Church.