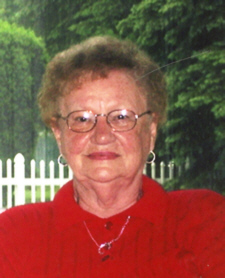 Ruth Mae McNear died of natural causes at 10:06 a.m. on Saturday, Dec. 29, 2007, at her residence, 908 W. Washington, Plymouth, Ind. Ruth was 80-years-old.
Born in Wabash County, Ind., on August 27, 1927, Ruth was the daughter of Emerson and Marjorie Wheatley McColley.
She graduated from Akron High School with the class of 1945.
On Nov. 5, 1949, she and Max McNear were married.
They moved to Plymouth in 1964. She worked in the circulation department of the Pilot News. Ruth and her husband, Max operated the Old Dutch Dairy at the corner of Jefferson and Michigan St.
She was very active and up until September of this year was still hard at work at The Little Store, located on 5th Street.
Ruth enjoyed the game of Euchre and played three times a week at the Moose Lodge and the Life Enrichment Senior Center.
She is survived by Max, her devoted husband of 58 years and by their daughter, Cindy and Bruce Burkart, South Bend, and their son, Michael McNear and his companion Elaine Best, both of Orefield, Pa.
Four grandchildren also survive. They are Cindy and Bruce’s children: Bruce Burkart, Jr and Amy Utz, both of South Bend and Mike’s children: Emily McNear, Orefield and Jeff Barbary, Exton, Pa. Five great-grandchildren survive as well. They are: Abbie, Michael and Chloe Utz and Frederyk and Finlea Burkart.
Ruth was preceded in death by her parents: two brothers, Norman and Herman and two sisters, Helen and Laveda.
Friends are invited to celebrate the life of Ruth Mae McNear on Wednesday, Jan. 2, 2008, from 2 to 6 p.m. in the Johnson-Danielson Funeral Home, 1100 N. Michigan St., Plymouth.
Funeral service, officiated by the Rev. Dr. Dean Fager, pastor of the First United Methodist Church, will be held in the funeral home following visitation at 6 p.m.
Burial will be in New Oakhill Cemetery, Plymouth.
Memorial gifts in Ruth’s memory are asked to be given to the St. Vincent’s Childrens’ Hospital, Indianapolis, Ind.