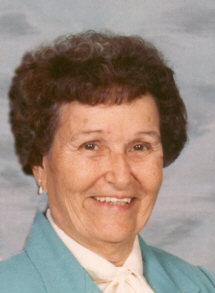 Ruth P. Hetfield, 85, 730 Freeman Drive, Plymouth, an area resident since May of 1970, died of natural causes in Miller’s Merry Manor, Plymouth, at 4:45 p.m. on Monday, August 7, 2006.
Ruth was born on September 7, 1920, the daughter of Bridge and Elizabeth S. Shelton Lewis, in McAllister, Oklahoma.
She attended Ardmore School.
On September 7, 1938, in McAllister, Oklahoma, Ruth and Floyd R. Hetfield were married.
Ruth had worked at Bendix before becoming a homemaker for her family.
She belonged to the Circulating Squares square dance club for seven years and enjoyed it very much.
An avid reader, she loved to work puzzles and enjoyed traveling. The couple spent nine winters in Florida.
Ruth is survived by Floyd, her husband of almost 68 years and by their son and daughter-in-law, Jack D. and Belia Hetfield of Plymouth.
Two grandchildren and three great-grandchildren survive as well, together with two sisters and a brother.
Ruth’s sisters are Bertha Shula of Indianapolis, and Mildred and Delbert Frick of Roseland, Indiana. Her brother and sister-in-law is Zearl and Maxine Lewis of South Bend.
Ruth was preceded in death by her parents and three sisters and two brothers. Her sisters were Pearl Quigley, Betty Town and Myrtle Kurzhal. Her brothers were Kenneth Lewis and Lucien Lewis.
Friends will be welcomed by the family to celebrate Ruth’s life on Thursday, August 10, 2006, from 12 noon until two p.m. at the Johnson-Danielson Funeral Home, 1100 N. Michigan St., Plymouth.
Funeral services for Ruth will be held after visitation at two p.m. on Thursday.
The Rev. William Kummer of St. Michael Catholic Church, will officiate.
Burial will be in New Oakhill Cemetery in Plymouth.
Memorial gifts in Ruth’s memory may be made to a charity of the donor’s choice.