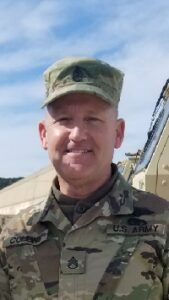 SSG. Ryan Collins, 59, passed away at home surrounded by his family on Thursday, August 13, 2020.
Born in Muncie, Indiana on July 1, 1961 Ryan was the son of Ferry and June (Slacum) Collins. He graduated from Ben Davis High School with the class of 1979.
Ryan married Dianna Demske on December 2, 1995 at Willow Creek United Methodist Church.
He loyally and proudly served his country with the United States Marine Corps in Ordinance from 1979 to 1983. After being honorably discharged from the Marines, he served with the Airforce. Most recently Ryan has served in the U.S. Army as a Water Purification Specialist and was a squad leader deployed to the Middle East in Support of Operation Iraqi Freedom. Perhaps his most rewarding position was rendering final honors for four years to honorably discharged veterans, those who were Killed in Action and Missing in Action. Ryan was a tremendous leader, who personified what it meant to lead by example. Ryan’s attention to detail on every military mission made him well known for who he was as an Non-Commissioned Officer. He will be deeply missed by those who led him, he served with and who directly served underneath his leadership.
Ryan enjoyed running marathons, especially any competitions held by the military. Fishing, hunting, his horse “Takoda,” and riding his motorcycle. Most importantly he loved spending time with his family, especially his grandchildren.
He is survived by his mother June of Lehigh Acres, FL; step-mother Sue Collins of Plymouth; wife Dianna of Argos; children: Cody (Cheyenne) VanLue of Mishawaka, IN, Austin Collins of Argos and Kaytlyn Collins of Argos; Brothers: Allan (Becky) Collins of Plymouth, Chris (Sharron) Collins of Plymouth, James (Laurie) McClellan of Plymouth, Shane (Chris) McClellan of Texas, Ron Collins of Plymouth and Dean Collins of Lehigh Acres, Fl; sisterâ€™s: Alpha Collins of Plymouth, Melanie Collins of Plymouth and Terresa Glover of HI ; grandchildren: Haven, Kinsley and Abigail. As well as several nieces and nephews.
Ryan was preceded in death by his father.
Visitation will be held on Friday, August 21, 2020 from 4 p.m. to 7 p.m. at the Johnson-Danielson Funeral Home, 1100 N. Michigan St. Plymouth, IN 46563.
Funeral services will be held on Saturday, August 22, 2020 at 12 p.m. at the funeral home with John Epley officiating. Visitation will resume one hour prior.
Burial will take place in the New Oak Hill Cemetery, Plymouth with full military honors conducted by the U.S. Army.
Memorial Contributions can be made to the Disabled American Veterans Chapter 42, 8419 Quince Road, Plymouth, IN 46563.
PLEASE NOTE: For your protection, the entire funeral home staff will wear masks. It is mandated that family members and their guests do so as well. The funeral home will not provide any masks.