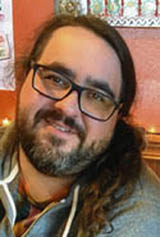 Ryan James Hampton, 31, of Nashville, TN passed away March 15, 2018 suddenly and unexpectedly.
He was born October 1, 1986 in Lewisville, TX to John W. Hampton and Darci J. (Gordon) Hampton. He is survived by his parents, John W. and Darci J. (Gordon) Hampton; his sister, Taylor D. and Jordan Sauer and his nephews, Aiden and Kingston Sauer and soon to be nephew, Maxson Ryan Sauer; his grandfather, Doctor James N. Hampton and grandmother Kristen A. Gordon. Also surviving are aunts and uncles: Dave (Traci) Hampton, Julie Hampton, Kim (Doug) Snyder, Mitch (Matt) Chamberlin, Matt (Kristy) Gordon and Walt (Isabel) Gordon; and several cousins, great-aunts and great-uncles, who loved him dearly. He was preceded in death by his grandparents, Larry (Dee) Gordon; grandmother, Frances Hampton; uncles, Stephen and Michael Hampton; aunt, Peggy (Larry) Annis; and great grandparents, Walter and Ruth Gordon.
Ryan â€œHammyâ€ was a 2005 graduate of Plymouth High School and moved to Nashville, TN in 2008 to pursue his love for music. He had the privilege of being able to play in several venues and pubs in downtown Nashville with some of his closest friends. He was an accomplished bass player and no one had a greater love for music than Hammy did. The only thing Hammy loved more than living in Nashville was coming home to his family and friends.
Ryan worked at Papa Murphyâ€™s and was the store manager for many years. His co-workers adored him, as did his frequent customers. Ryan found something to admire and care about in every person he met. He noticed and appreciated the little things in life and his friends and family loved that about him. Ryan was known for making people laugh and he simply wanted everyone to be happy. Heaven received a beautiful soul and he will be deeply missed here on earth. Visitation will be held on Thursday March 22, 2018 from 4-8 p.m. in the Johnson-Danielson Funeral Home, 1100 N. Michigan Street, Plymouth. Funeral services will be held at 11 a.m. on Friday, March 23, 2018 in the funeral home with Life Celebrant Jim Smart officiating. In lieu of flowers, memorial contributions in Ryanâ€™s honor can be made to the Plymouth Flood Relief 2018 through the United Way of Marshall County, PO Box 392, Plymouth, Indiana 46563.