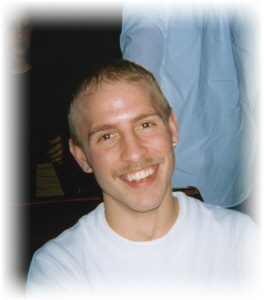 Ryan Leigh “Woody” Woodward, died at his Nappanee residence, at 3:26 a.m. on Monday, October 31, 2005. Complications from long-term asthma led to his death. He has endured much in his life of 24 years.
Ryan never let anyone down. He was always considerate of others. He loved people, so much so that he wanted to help others even beyond his death. He was an ardent supporter of the Organ Donation Program and, so according to his wishes; his family gave as was needed to help others. Born in Carlsbad, California, on August 8, 1981, Ryan was the son of William “Bill” Woodward Jr. and Laurie A. (Klinedinst) Nelson. He graduated from Plymouth High School with the class of 2000 and planned to attend Wyoming Technical College and open his own custom shop to be called: Sweet Dreams Customs.
Ryan was known as a hard worker. He had worked at the Plymouth Damon’s Restaurant and, for the past three years in the R.V. manufacturing industry currently in final finish at the Forest River plant in Goshen, Ind. His prior employment also included service at Keystone R.V. in Goshen.
He had a passion for cars – especially his black 1993 Lexus Super Coupe. A perfectionist with an eye for detail, he was also a car stereo addict, who designed competition sound systems and was adept at installations and repair.
Time spent with family was important to Ryan and he found fishing a time to relax.
Ryan is survived by his mother Laurie and step-father Earl J. Nelson of Plymouth, his father Bill Woodward and close friend Tricia, both of South Bend.
A sister, Tami June Woodward of Plymouth, nephew Michael Anthony Yoder and niece Kali Rachelle Yoder survive as well as Ryan’s brother, William Fredrick “Fred” Woodward III and friend April, with nephew Cameron Jacob Woodward all of Walkerton also survive. Paternal grandfather, William Frederick Sr. and Joan Woodward of Columbus, Indiana; paternal grandmother, June and Richard Sanetra of Springhill, Florida; paternal great grandparents, Luther and Bernice Stowe of Owensboro, Kentucky and maternal grandparents, Norman and Eileen Klinedinst, Plymouth, survive as well.
Friends will be welcomed by Ryan’s family on Thursday, November 3, 2005, from 4 to 8 p.m. in the Johnson-Danielson Funeral Home, 1100 N. Michigan St., Plymouth and continue after 7 a.m. Friday until time of services.
Funeral services for Ryan will be held at 11 a.m. on Friday, November 4, 2005, in the funeral home. Burial will follow in New Oakhill Cemetery, Plymouth.
Memorial gifts in Ryan’s name may be made to a charity of the donor’s choice.