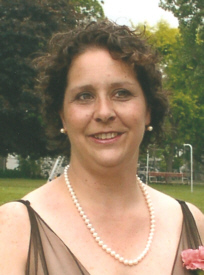 Sandra R. King, 48, passed away on Tuesday evening December 2, 2014 in Miller’s Merry Manor in Warsaw, after a second courageous battle with cancer.
Born in Bremen, Indiana on April 29, 1966, Sandra was the daughter of Anthony R. King and Shirley A. (Schaetzle) Batty. She graduated from Triton High School with the class on 1984.
She received her BSN from Ancilla College. Sandra worked for Michiana Behavioral Health Center in Plymouth, until she was unable to due to the cancer.
She loved fishing, antiquing and her dog, Nelson. She could always be found at Goodwill shopping and finding great deals. When she had the chance for vacation, Sandra would travel to Florida and enjoyed having her feet in the sand. She cherished time with her family and adored her grandchildren. Sandra never met a person that did not love her, and she was a “Mom” to many of her son Ryan’s friends and a mentor to children at the Behavioral Health Center.
Sandra is survived by her son, Ryan A. (Casie) Shanyfelt of Plymouth and her grandchildren, Caden and Olivia; her mother and step-father, Shirley (Ron) Batty of Bourbon; her siblings: Gerri King of Bourbon, Jeffery (Kim) King of Warsaw, Beth (John) Shaw of Lafayette, Jay (Kelly) King of Bourbon and step-sister, Jessica (Scott) Thomson of Chicago; and several nieces and nephews.
She was preceded in death by her father, Anthony, and her ex-husband, Alan Shanyfelt.
A Celebration of Sandra’s Life will be held on Monday, December 8, 2014 at the Christo’s Banquet Center, Plymouth, from 1-4 p.m.
In lieu of flowers, memorial contributions can be made to the American Cancer Society.