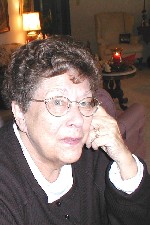 Sarah Ann “Sally” Jones, 75, died of natural causes following a lengthy illness, on Sunday night, March 5, 2006, at 8:50 p.m. in her residence, 1209 W. Madison St., Plymouth.
Sally died as she had lived: surrounded by the loving care of her husband, Robert, and their two daughters, Lori and Erin and families.
A Plymouth native, Sally was born the fifth child of James Henry and Edna Henrietta Freyman Langdon, on September 6, 1930. She graduated from St. Michael’s Parochial School and from Lincoln High School with the class of 1948.
In September of 1952, Sally earned her Registered Nurse’s degree from St. Margaret’s School of Nursing in Hammond, Indiana. A dedicated nurse, skilled in all areas of care, she first worked in Chicago and later at Memorial Hospital, South Bend, and in Plymouth’s Parkview Hospital.
On November 8, 1962, Sally and Robert Evan Jones were married in Honolulu, Hawaii.
They lived in Hawaii for 14 years before moving back to Plymouth in 1975.
From 1989 until 1993, they lived in Plymouth and were part time residents in Sebring, Florida. They established permanent residency there before health complications caused the couple to return home to Plymouth in 2004 in order to be close to their family.
Sally had a great sense of humor. She also had the endearing qualities of sincerity and compassion for others. She brought much joy, laughter and unconditional love to those who knew her. Her friends, dating back to grammar school, were many.
Even when ill, Sally was always happy and never complained.
She adored her grandchildren and enjoyed playing rummy cube and cards with them.
She was adept at cross stitching and ceramics and gifts of her work are cherished by her family and friends. Sally is survived by Robert, her devoted husband of 43 years and by their children and grandchildren.
They are daughter: Lori Langdon Day and husband Ronald Richard and their children: Kathryn L. “Katie” Day and Eric R. Day, all of Plymouth and daughter: Erin Langdon Houser and husband Dustin Wayne and their children: Rebecca L. “Becca” Houser, William E. Houser and Patrick L. Houser.
Step-daughter: Kathryn Ann Jones, Longview, Texas and step-son: Robert Joseph “Bud” and Stephanie Jones, Fishers, Indiana, and son: Garrett J. and Andrea Jones and great-granddaughter, Porsche Jones.
Three brothers and sisters-in-law also survive Sally’s death. They are: Robert Henry and Mary Alice Langdon, Terre Haute, Indiana: Patrick Joseph and Betty Langdon, Plymouth: and Thomas Victor and Kay Langdon, also of Plymouth.
A sister-in-law, Jean L. Langdon, Plymouth: a brother-in-law, Charles L. Kern, South Bend, and numerous nieces and nephews survive as well.
Sally was preceded in death by her parents, a brother, William “Bill” Langdon who died in 1991, and a sister, Marynell Langdon Kern who died in 2005.
Friends will be welcomed by the family to celebrate the life of Sally Jones from 4 to 8 p.m. on Wednesday, March 8, 2006, in the Johnson-Danielson Funeral Home, 1100 N. Michigan St., Plymouth, Indiana. A rosary will be prayed that evening at 7:30 p.m. The Mass of Christian Burial for Sally will be at 11 a.m. on Thursday, March 9, 2006, at St. Michael’s Roman Catholic Church, 615 N. Center St., Plymouth. The Rev. Father William Kummer, pastor of the church, will officiate.
Interment will be in New Oakhill Cemetery, Plymouth.
Memorial gifts in Sally’s memory may be made the Center for Hospice and Palliative Care, 112 S. Center St., Plymouth, Indiana 46563 St. Michael’s Parish, 612 N. Walnut St., Plymouth, Indiana 46563 or a charity of the donor’s choice.