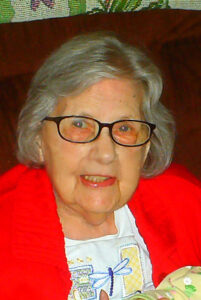 Sarah C. Kepler, 92, a Plymouth resident for many years, died at 1:30 a.m. on Saturday, September 17, 2011, at her daughter’s home in Mishawaka, IN.
The daughter of Lawrence and Nettie Goodin Fair, she was born on May 10, 1919 in Bluffton, IN. She was a 1937 graduate of Bluffton High School and also graduated from Franklin College in Franklin, IN.
Sarah and Lewis “Reed” Kepler were married on November 5, 1941 in Bluffton, IN. Reed preceded her in death on February 26, 1979.
She had worked at the PILOT NEWS in Plymouth, and later obtained her teaching certificate and taught at Lapaz/LaVille High School for many years. Sarah enjoyed sewing, reading, playing Bridge, and most of all, spending time with her family, especially her grandchildren and great grandchildren.
She is survived by two daughters: Carol (Phil) Smith of Mishawaka, IN and Sarah Kathryn “Kay” Lattimer of Indianapolis, IN; a daughter-in-law, Linda Kepler of Plymouth, IN; five grandchildren and 15 great grandchildren and a sister, Rose Snider of Ft. Recovery, OH.
Preceding her in death were her parents, husband, a son, Lewis “Jim” Kepler, two sisters and a brother.
In accordance with Sarah’s wishes, there will be no viewing, only a small graveside service will be held at 1:30 p.m. on Friday, September 23, 2011 at the New Oakhill Cemetery Chapel, Plymouth, IN.
Burial will be in New Oakhill Cemetery.
Memorial gifts in Sarah’s name may be made to the Center For Hospice Care, 112 S. Center St., Plymouth, IN.