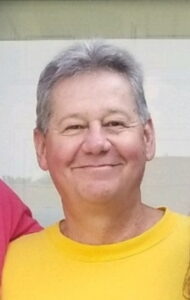 Scott D. Miller, age 64, passed away on September 26, 2019 after a courageous battle with cancer.
He was born in South Bend, IN to Robert and Betty (Kopet) Miller. Scott married the love of his life, Kay Miller on August 8, 1992, in a beautiful family event in Plymouth, IN.
After graduating from James Whitcomb Riley High School, Scott went on to earn a certificate from the U.S. Department of Labor in Tool and Die. He used those skills as a Journeyman for Capitol Technologies, becoming a Lead Journeyman Tool and Die Maker for 26 years. He recently retired from Conn-Selmer in Elkhart. He enjoyed hearing the instruments being played by musicians who frequented the facility. Scott lived his life with passion. He was a devoted and loving parent to his three children. He had a serving heart who put others before himself. One of his lifelong passions were for airplanes and Union Pacific trains. Scott and Kay had property on Yellow River that they enjoyed hosting family and friends at for recreation. Hunting, fishing, trap shooting kept his interests. One of his greatest memories was a hunting trip he took with his brothers to Wyoming.
Scott was very proud of his children and their families. Scott always remained humble and kind through all of lifeâ€™s trials and tribulations. He is survived by his wife Kay of Plymouth, IN; his daughter Air Force MSgt. Sarah Chelone and her husband Chris Chelone, US Army Retired of San Tan Valley, AZ; his son William Miller and his wife Jessie of San Tan Valley, AZ; his brother Michael Miller of Granger, IN; his sister-in-law Kathleen Miller of South Bend, IN; his six grandchildren and one great grandchild as well as numerous nephews and nieces, many friends, Welby the Schnauzer, and other family members.
He was preceded in death by his son Gabriel Miller on June 4, 2017, his parents Robert and Betty, and his brother Gregory.
Public Viewing will be held Tuesday, 1st of October, 2019 from 4:00 PM to 7:00 PM at Johnson-Danielson Funeral Home.
Visitation will continue on Wednesday, October 2nd at 10:00 AM until the hour of service at 11:00 AM at Johnson-Danielson Funeral Home with Life Celebrant James Smart officiating. Burial will follow at New Oak Hill Cemetery in Plymouth, IN.
In lieu of flowers donations to the Marshall County Humane Society 11165 13th Rd. Plymouth, IN 46563 would be appreciated.