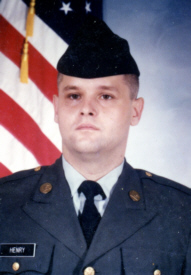 Scott G. Henry, 45, passed away after an extended illness with his family by his side on Tuesday night May 12, 2015 in the St. Joseph Regional Medical Center, Plymouth.
The son of Charles Richard and Lonna Dee (Denney) Henry, Scott was born and raised all his life in Plymouth, Indiana. He graduated from Plymouth High School with the class of 1987. He then attained his Masters of Art Degree and his Bachelors in Psychology from Ashford University.
In 1990, he enlisted and served our country in the U.S. Army.
Scott was an artist in his heart and soul. He enjoyed writing short stories and poems. He became ordained as a minister and married 4 couples, including his sister and brother-in-law. Scott also had dreams of opening his own church.
He was the kindest person you’d ever meet and had a love for everyone, but his dog, Buddy, had his special heart. Scott had the gentlest soul and was a bright light in his family. You could always go to him for advice about anything.
He is survived by his mother, Lonna of Plymouth, his sister, Lisa J. (Michael) Woods of Rochester, and his brother, Chuck (Beth Wilcoxen) Henry of Mitchell, IN. Also surviving are nieces and nephews: Ross Henry, Ciara Woods, Charlene Yarbrough, Kayla Mesarosh and Kevan Wilcoxen, and many aunts, uncles and dear friends.
Scott was preceded in death by his father, Charles, his maternal grandparents, Joseph and Cora Denney, and paternal grandparents, Kenneth and Mildred Henry.
Visitation will be from 11-12 p.m. on Saturday, May 16, 2015 in the Johnson-Danielson Funeral Home, 1100 N. Michigan Street, Plymouth. Funeral services will immediately follow in the funeral home at noon.
Private family burial will take place in the New Oakhill Cemetery with Military Honors provided by members of the American Legion Post 27, Veterans of Foreign Wars- Marshall County Post 1162 and D.A.V..
In Lieu of flowers, memorial contributions can be made to the Humane Society of Marshall County, PO Box 22, Plymouth, IN 46563.