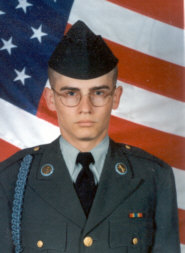 TAPS
Thanks and praise. For our days,
‘Neath the sun. Neath the stars.
‘ Neath the sky.
As we go, This we know.
God is nigh.
Sergeant Patrick “Pat” Wayne Strickland, 19008 6B Road, Plymouth, died at 8:10 p.m. on Friday, August 6, 2004, in Parkview Hospital, Fort Wayne, Ind., as a result of an automobile accident. Pat was 26 years old.
Born the son of Bo and Debbie Strickland in LaPorte, Ind., on September 14, 1977, Pat graduated from John Glenn High School with the class of 1997.
Pat was a member of the Indiana National Guard for nine years. A member of Company H of the 151st National Guard infantry unit from Plymouth, he had come home safely earlier this year after serving his country for 14 months in Iraq. He was honored with an award upon his return. The young soldier will be remembered as someone who loved his country and was proud to serve her and his fellowman. Even after death, he continued to give of himself. As an organ donor, seven recipients will live because of his desire to help other people.
In just over a month, Pat and his wife, Jennifer Strickland would have celebrated their fourth wedding anniversary, having been married in Plymouth on September 9, 2000.
He was a quality control inspector for Fairmont Homes in Nappanee.
Pat liked to fish and to beat everybody bowling, tinkering with stereo equipment — but most of all, being with his beloved daughter, Sierra and his family.
Pat is survived by his wife, Jennifer and their daughter, Sierra, both of Plymouth.
Other survivors are: his mother, Debbie Strickland, Plymouth; his father and step-mother, Bo and Joy Strickland, Lakeville; two brothers, Timothy and Sandy Vice, Temperance, Mich.; and Bo Strickland, Lakeland, Fla. A sister Barbara and Mike Shoemaker, Cedar Lake, Ind., and a stepbrother Derrick O’Blenis also survives.
Others are: maternal grandfather, Wayne Vice, Flagstaff, Ariz.; maternal grandmother, Florence and Tom Erdelyi, Walkerton, Ind.; paternal grandmother, Mildred Pegg, Walkerton, Ind.
Karen Boocher, Pat’s mother-in-law and Marc Stump, his brother-in-law, both of Plymouth, also survive. Father-in-law, Dennis and Pam Stump, Chino Hills, Calif., survives as well, together with several aunts, uncles, nieces and nephews. Pat was preceded in death by a grandfather, Jack Pegg and an uncle, Floyd Dale.
Friends will be received by the family from 3 to 8 p.m. on Thursday, August 12, 2004, in the Johnson-Danielson Funeral Home, 1100 N. Michigan St., Plymouth.
Chaplain Major Daniel E. Sherar, a chaplain for the Indiana National Guard, will officiate at Pat’s funeral services on Friday, August 13, 2004, at 11 a.m. in the funeral home.
Full military graveside honors by will conducted in New Oakhill Cemetery, Plymouth.
Memorial gifts in Pat’s name may be made to Brain Injury Assoc. of America or to the Sierra Strickland trust fund c/o First Source Bank, Plymouth, Indiana.