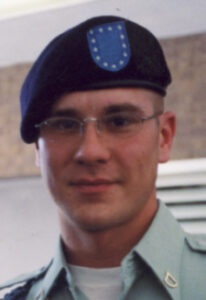 Sergeant Jason Lee Nemeth, 26, died at his residence 10734 Muckshaw Rd., Plymouth, Ind. at 12:42 a.m. on Wednesday, June 29, 2011.
Jason was born in South Bend, Ind. on November 29, 1984, the son of Timothy and Diana O’Hara Nemeth.
He graduated from Plymouth High School with the class of 2003, and from Ball State University with a B.S. in Criminal Justice in 2008.
He joined the Army on Sept. 12, 2006, and was still active with the Indiana Army National Guard.
Jason was employed with the Marshall County Sheriff’s office.
He loved to play golf, hunt, target shoot and to hang out with his brother and college friends. They got together several times a year.
His favorite college spring break place was South Padre Island and he enjoyed the Ball State Homecomings and tailgates.
He loved his family with all of his heart and his German Shepherd, Waucher.
Always active, he was prepared for everything and was determined to be the best. He stayed in great physical shape by working out.
Jason enjoyed watching and cheering on the Indianapolis Colts, and was also active playing semi–pro football for a short time.
A true hero, Jason was deployed to Afghanistan for one tour of duty. For his part in these achievements, he was awarded the Combat Infantry Badge, the Army Accommodation Valor Device, the Army Achievement Medal and the Afghanistan Campaign Medal with one Star.
Jason is survived by his parents, Tim and Diana Nemeth, Plymouth, Indiana and a brother, Steve, Muncie, Ind.
Also surviving are Gene and Margaret O’Hara, maternal grandparents, South Bend, Jason is also survived by his aunts and uncles Marcia and Dennis Santino, Florida, Mike and Helen O’Hara, South Bend, Mark and Mary Jane O’Hara, and Michele and Darren Couts, all of Oregon and numerous cousins.
Jason was preceded in death by Charles and Virginia Nemeth II, his paternal grandparents and Charles Nemeth III, an uncle.
Friends of Jason and his family may share memories and visit with the family on Saturday, July 2, 2011, from 11 to 2 p.m. at the Plymouth Wesleyan Church, 11203 S. Michigan Rd., Plymouth, Ind.
Funeral services for Sgt. Jason Nemeth will be held in the church with Pastor Ollie Dongell officiating following the visitation at 2 p.m. Memorial gifts in Sgt. Nemeth’s memory may be given to the www.woundedwarriorproject.org or mailed to PO Box 758516 Topeka, KS 66675-8516